Have you ever heard of Big, Ugly, Hairy, Wrong Fallacies?  The truth is, you probably have, and you didn’t even know it.  We usually call these “logical fallacies” and if you don’t know what that means, you’re at the right stop.  Don’t skip this important exercise!  You’ve already learned that the SHSAT is set up like a game, and game developers use a special type of language—‘code’—or, a logical sequence, to write the game.  “Logic”, to someone who hasn’t studied it, might seem scary.  But, you’re a problem solver, so you already know enough to figure out that logic is just the code that SHSAT writers use to write the test.  Logic really just means the science of reasoning—or, rules for right thinking.  You can learn more about logic by looking at “Logical Sequences”, but another great place to tackle the challenge that you might face within the ELA part of the exam is to look at common logical mistakes.  (By the way, this can also help you for the math part, since math and logic are closely related languages.)
Since the SHSAT writers are using logic for their code to write the exam, if you can remember basic logical mistakes that people make, you’ll be in excellent shape to narrow down your answer choices on the test to the correct ones.  Logical mistakes are errors in thinking that are always wrong.  What makes them always wrong is that, if you use the same thought pattern—only with different examples—you end up with crazy results.  Good reasoning is reasoning that we can use all the time, with any argument or evidence we give, and the result makes sense.  Faulty reasoning ends up with faulty conclusions.  Here’s some examples of types of reasoning that are always wrong:

Ad Hominem  “Against the Man”

Ad hominem arguments feel so good sometimes!  It might seem like a good idea to cast doubt on arguments from people you don’t like, mistrust, gross you out, or you completely disagree with on most issues.  But, the source of the claim doesn’t necessarily mean that the claim is wrong.  (If you’ve heard the cliché “a broken clock is right twice a day”, you’ll know what I mean—sometimes even our enemies are right…just don’t tell them I said so!)
This picture is a fantastic example of an ad hominem: 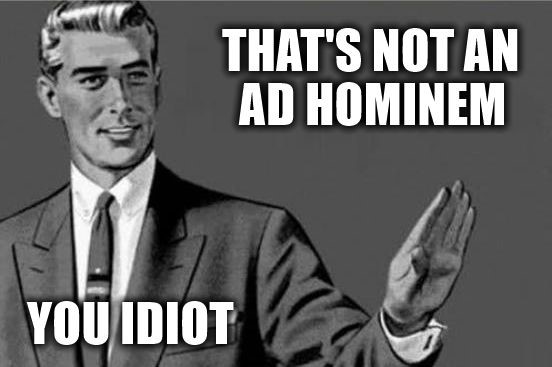 The idea is that this dude is correcting you with the truth of a claim (the claim that sometimes wasn’t ad hominem) by giving the reasoning that you are an idiot!  The truth of what he’s saying is supposed to come from the personal attack on you.
Why are ad hominem arguments always wrong? Because whether a statement is true does not depend on the person who is saying it—just like whether something is true doesn’t come from whether you say it.  Whether something is true comes from whether what’s in the world matches what someone is saying.  In your case, for the SHSAT, if you see an ad hominem, run away from it as a correct choice!  Ad hominems will never be a correct answer choice! What are the chances you’ll see an ad hominem as an answer choice? Really good! Writers like to put logical fallacies like ad hominems on the exam because they usually make people feel strong emotions.

Now, you might see “Either/Or” and say, “WHAT THE HECK?!  I SAY EITHER/OR ALL OF THE TIME, AND IT’S NOT A LOGICAL FALLACY.”  All right!  Simmer down, Sherlock… you are right!  This isn’t suggesting that any time a choice is given—either you’ll read Grapes of Wrath or the latest Iron Man comic—that you’ve messed up logically.  Either/or statements (Pro Tip:  these are called disjunctions) are frequent, and are OK logically.
BUT…it’s always a logical fallacy to break down options into only two when there are other options available.  Your job on the exam is to make sure that you aren’t given a false disjunction—and either/or statement that misses out on other possibilities.  If I tell you that tonight before bed, you can only read Grapes of Wrath or the latest Iron Man comic, and you don’t own either own of them…guess what?  It’s false that you can only read the book or the comic, because you can’t do either.  If you own all of the Steinbeck books, the entire Iron Man series (lucky you!), as well as Lewis, Vonnegut, Evanovich, and Cooper, then it would be false to say that you could only read those two particular items.
One popular false disjunction that we hear so often is “Love it or Leave it”.  Sometimes, the phrase might pop up in something as harmless as a pin: 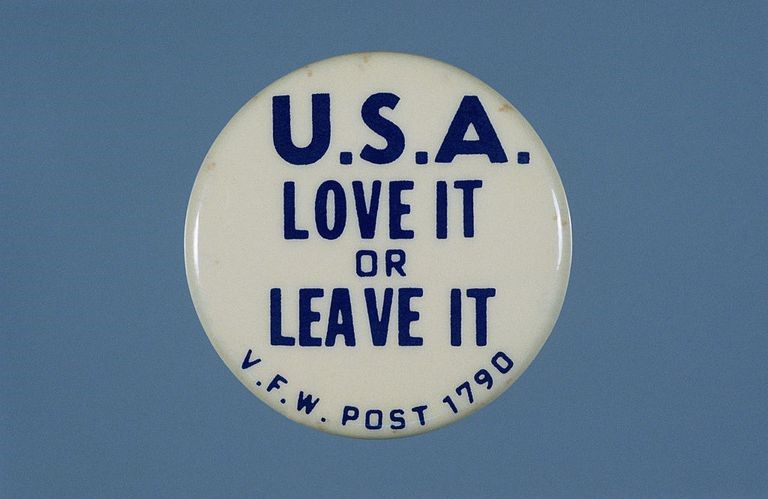 While the sentiment might ring true (we love our country), it isn’t actually true that you can either love the USA or you have to leave it.  There are lots of people that sometimes love their country, and sometimes are frustrated with its policies.  There are other people who like the country enormously, but save the word “love” for people they care about.  Others might have to leave the country because they love it, for example, if they are deployed through military service.
Why are false disjunctions always wrong?  Because they set up an ‘either/or’ scenario that isn’t either/or—there are more options that what is given by it.  Your chances for seeing false disjunctions are pretty good.  Careful reading will make sure that you keep your eye out for including options that aren’t already included.  The bottom line is that if you see the words “Either….or…”, you probably have hit on a wrong answer! 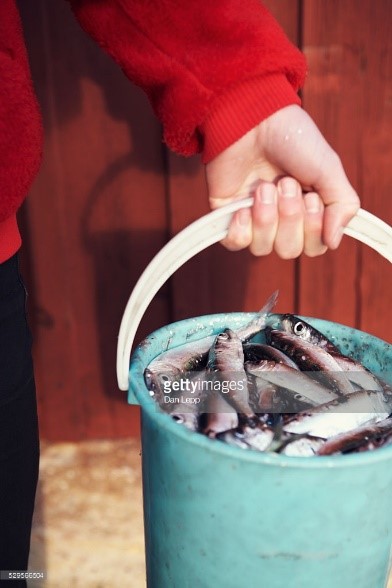 Red herrings are beautiful, attention grabbing, and hard to look away from, in everyday life.  In conversation, red herrings are ridiculous claims that people make to distract you
from the main idea.  What makes them beautiful, attention grabbing, and hard to look away from in everyday life is the exact thing that makes red herrings beautiful, attention grabbing, and hard to look away from in conversation and arguments.  The red herring is so distracting, you feel compelled to focus on it.  You just *have* to show the person who is throwing the red herring around that they are wrong!
Imagine in a couple of years, you’re asking your college roommate if he paid the rent.  What if he blurts out, as a response, “What does it matter if I did or not?  Nothing I ever do makes you happy!”  Now…apart from needing a new roommate… you should be thinking:
RED HERRING!  What your roommate is trying to do is to distract you with something completely irrelevant so that you will focus on that instead of whether the roommate paid the rent.  The main point of your question is, of course, to figure out whether you’re going to get evicted.  He’s willing to say something outrageous, like, “Nothing I ever do makes you happy,” so that you will try to show him lots of things he does that has made you happy, and an hour later, the landlord might show up to kick you out of the apartment!
Why are red herrings always wrong? Because they are never about the reasoning, evidence, or truth about what you will be reading in the SHSAT.  Written red herrings are just as distracting—and attractive!—as spoken words.  Watch out for them.  If you see answer choices that are irrelevant (and often, say crazy things), run away from them!  They won’t be correct.

Just as you will be seeing revisions on the SHSAT that have rely on grammar basics like Subject/Verb Agreement and Articles, you also will need to remember how to structure…

As testing days continue to rise in districts around the country, many educators and researchers believe schools could do a better job minimizing the stress and anxiety students feel due…

When you’re prepping for the SHSAT, make sure that you don’t make common mistakes.  Here’s the thing:  you aren’t common!  You’re on a path to going to the school of…