There is a place in New Zealand that has the longest name for a place in the world. It is called Taumatawhakatangihangakoauauotamateaturipukakapikimaungahoronukupokaiwhenuakitanatahu. This place has 85 letters in the name if you counted all of the letters. If you wanted to memorize this place’s name so that you could spell it easily, how would you go about doing it? One way would be to divide the name into chunks and memorize each chunk of letters. To do that, it would be best that each chunk contains the same number of letters as the other groups. Use the factors of 85 to divide the name into equal chunks?

Finding the Factors of 85

Certain steps are needed to find the factors of a number like 85. You may be able to tell right off the bat that 85 does not have a lot of factors for it. First, it is not an even number. Second, it is not a number that has a single-digit multiplication fact for it. However, let’s see if we can find all of the factors. There might be a surprise set of factors in there that you might not have thought of. This might cause problems because it would be easy to miss factors if they are not obvious.

There are 85 animals on a large farm. There is an equal number of animals on the farm. These animals include pigs, cows, sheep, horses, chickens, deer, fish, doves, turkeys, rabbits, bees, ducks, goats, llamas, geese, donkeys, and oxen. With all of these animals, the farmer in charge must quarantine these animals according to the type of animal they are. He realized this might be difficult since he has to find a place for each type without them mixing together.
Use the factors of 85 to find the number of animals that will be in each group.

There would be 5 animals in each group. To find this out, you would need to first count the number of types of animals that the farmer has. In this case, there are 17 types of animals. Then, 17’s factor partner is 5 because 5 times 17 equals 85.

At a convention, 85 people showed up to listen to the speakers as well as attend workshops throughout the day. The schedule for this convention has all of the 85 attendees listening to a speaker introduce the day’s events. Then the people will attend a certain amount of workshops throughout the day and the conference will end with the speaker’s closing words. The people will get to attend whatever workshops they want choose from a list, but there are only 17 slots for each workshop. If there are no slots left, then an attendee must choose another workshop at that time. How many workshops will there be at a time if there are just enough slots available for all 85 attendees?
Use the factors of 85 to answer the question.

There would be 5 workshops available at each given time. To figure this out, you would need to know 17’s factor partner, and that is 5.

While taking a test, you realize that each of the 100 problems is worth 1 point and the test is out of 100. You must make an 85% in order to keep your A in that class.
Use the factors of 85 to determine how many problems you must get correct to keep your good grade.

The best way to find a factor partner is to first find the factor. It would be best to start with 2 and see if 2 is a factor for 85. However, it is not. Then, try 3 and 4. Those are not factors either. You may know that 5 is a factor of 85 because the number ends in 5. Then you will need to see what multiplied to 5 will equal 85. In this case, it would be 17. 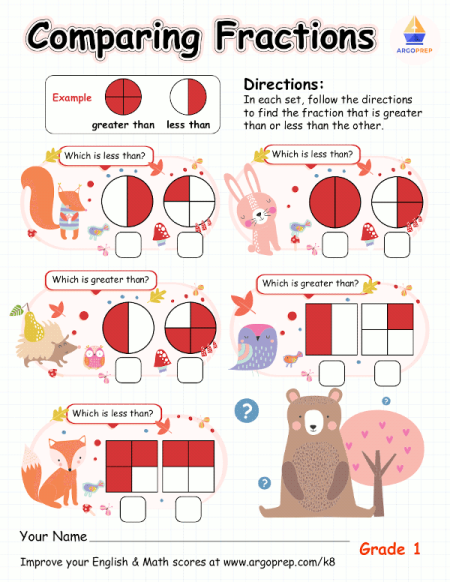 Nothing would thrill these woodland animals more than to have kids help them decide which of the fractions in each of these pairs is “greater than” or “less than”! Kids will look at two shapes, each divided into equal parts, and decide which is greater or less than. They’ll follow the directions and answer each…
View 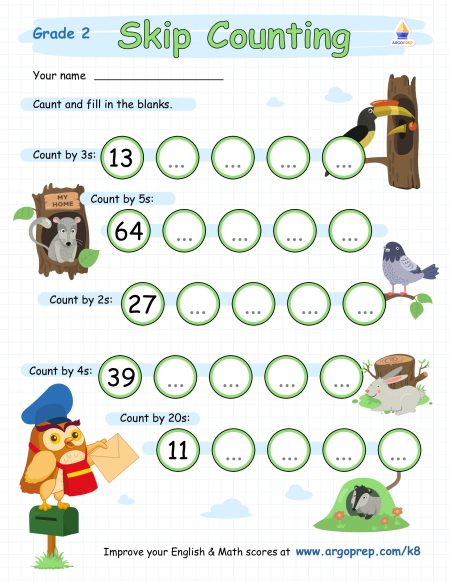 Skip Counting with Oswald the Owl

Skip Counting with Oswald the Owl

Whooooo is ready to skip count?! Oswald the Owl is practicing skip counting with his forest friends. Starting at various two-digit numbers, students will skip count by 2’s, 3’s, 4’s, 5’s and 20’s. Numbers in the skip counting pattern will be written in the provided circles.
View 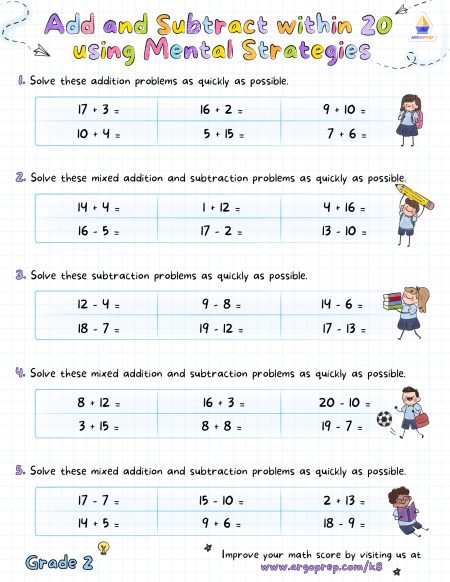 These students are solving; can you help? Addition and subtraction are the focus of this great learning resource. With plenty of opportunities to show what they know, students will love racing with accuracy to complete the page! The race to success is on!
View 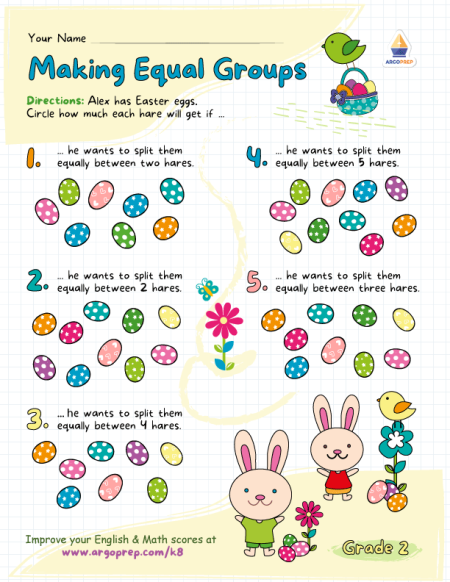 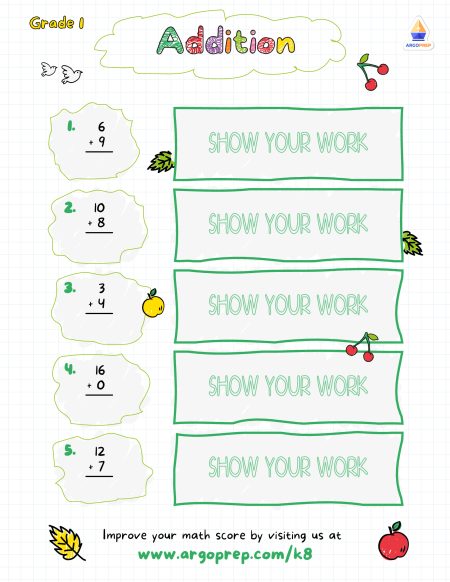 In this peaceful introduction to adding in columns, students have lots of room to represent the five equations. They can draw, place small leaves, or even trace acorns. It’s a great test-run for transitioning from horizontal addition problems to vertical. All of the sums are less than or equal to 20, and one is less…
View 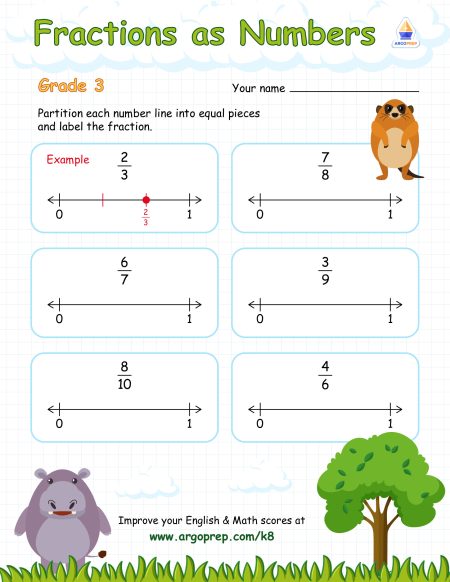 Plotting Fractions on a Number Line

Plotting Fractions on a Number Line

Fractions can be fun! Kids can use these number lines to show fractions as real numbers. They’ll divide the line into equal parts, then plot the fraction. This is great practice for kids learning about fractions!
View 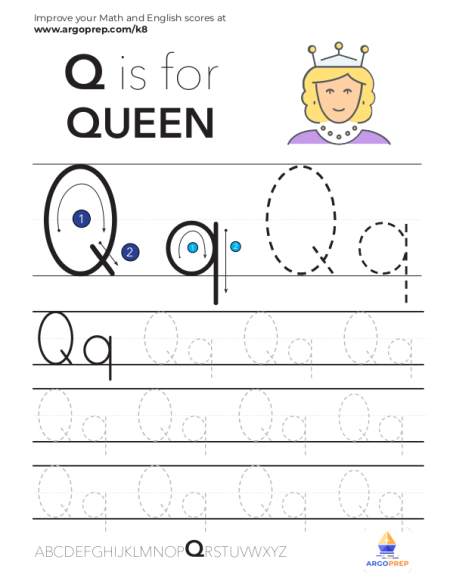 Make your classroom the best place to be for your students with engaging and interesting learning resources. Get our trace letter “Q” worksheets to combine learning, practice and fun for your young learners.
View 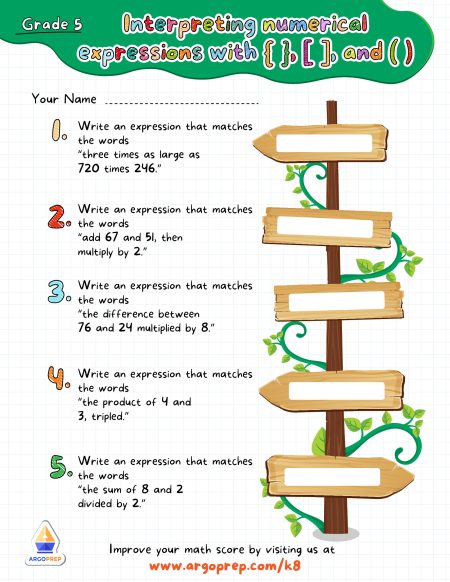 Left or right, up or down, so many decisions! This worksheet asks learners to decide which one matches the given numerical expression. Fifth grade students will build confidence as they carefully read each one. After deciding, they will write their response in the arrow. A great practice or assessment, let your learners tell you which…
View 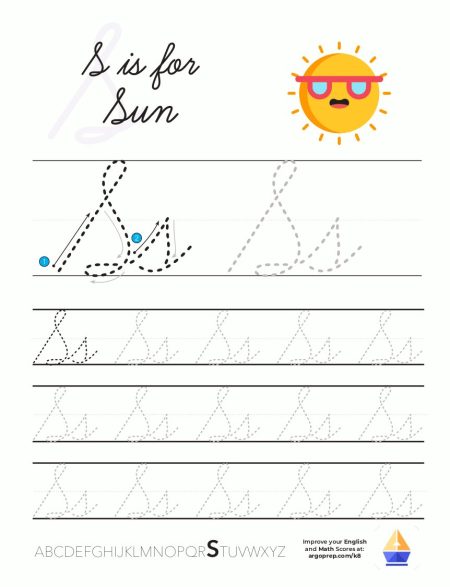 Cursive writing has tremendous benefits, including letter formation, recognizing whole words easily and becoming better deciphers. We bring you easily accessible printable Cursive S worksheets so that you can give your kids all the learning benefits they deserve. Our printable resource will be the next best uppercase and lowercase experience for your classroom!
View 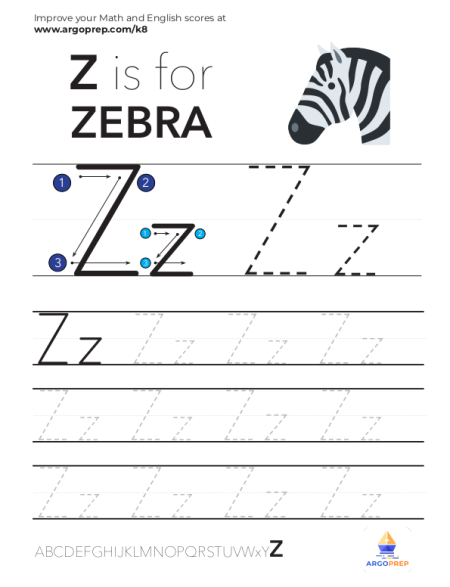 Tracing letters can get quite boring but not with this worksheet. Help your kindergartners accomplish the letter “Z” with our worksheet like a pro. They’ll beg you for more practice with this.
View 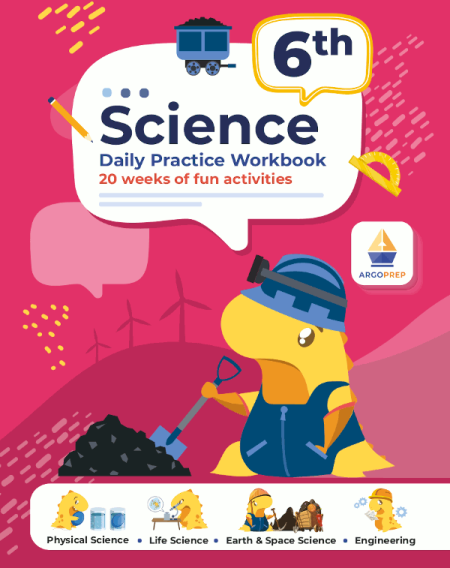 Students will explore science topics in depth with ArgoPrep’s 6 E’S to build science mastery. Engaging with the topic: Read a short text on the topic and answer multiple choice questions. Exploring the topic: Interact with the topic on a deeper level by collecting, analyzing and interpreting data. Explaining the topic: Make sense of the topic by explaining and beginning…
Shop Now
SAVE $30 Engaging with the topic: Read a short text on the topic and answer multiple choice questions.
Shop Now
SALE Get ready for Grade 4 with our award-winning summer workbook! This workbook provides twelve weeks of comprehensive review for Math and English Language Arts to help your child get ready for third grade. Each week also includes activities for science and social studies that is designed to spark your child’s curiosity. This workbook is designed…
Shop Now
New 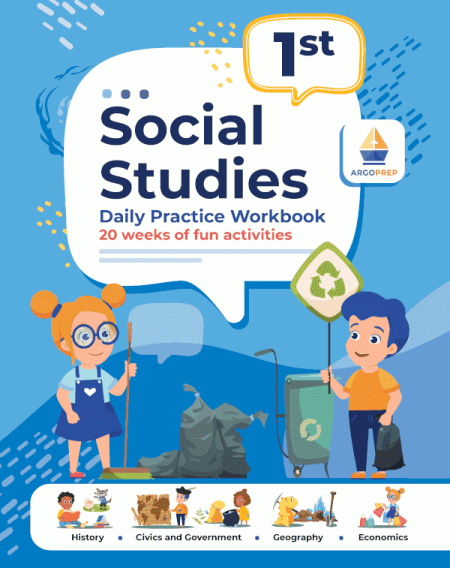 10 min read
Textual Evidence: Writing Engaging Essays
K8
One of my favorite assignments was asking my students to research a medical mystery. Students would select a medical mystery from the list and then research the history, information, and diagnosis of random medical conditions that had affected patients. My students loved learning about these random medical conditions, but they were only able to write […]

8 min read
How hard is the SHSAT?
SHSAT
If you believed everything older students told you, you’d believe some crazy stuff, right?  Let’s face it:  students a couple of years older can occasionally give you bad advice and (like any person) can tell you things about what you should expect based on experiences they have had.  But, your experiences are often very different—because […]