In this article, we will be discussing why 11 is a prime number. In fact, it is a special one.

Number 11 is not only the smallest natural number made of a repeated digit, it is also the smallest two-digit prime.

Get ready to learn more properties about 11!

A natural number is called a prime number if it is greater than 1, and it doesn’t have proper factors. For example, the first prime numbers are 2, 3, 5, and 7.

Number 11 is a prime number because it doesn’t have proper factors. In other words, the only factors of 11 are 1 and itself.

To be sure of it, we can use the following property.

On the other hand, prime numbers cannot be split into equal parts, each having more than one element.

This is another way of verifying that 11 is a prime number:

Thus, the only way of splitting 11 stars into equal parts is putting one star in each of 11 parts. This means that 11 is a prime number!

Which class of prime number is 11?

Since 11 it is the 5th prime number, and 5 is also prime, 11 belongs to the class of super-prime numbers: they are the prime numbers that occupy a prime position in the list of all prime numbers.

Number 11 can be classified into many different classes of prime numbers. We will name three more classes here, and then we will see to which of these classes number 11 belongs.

Do you know that 13 is another prime?

« Adjectives Starting with Z – 376 Words to Boost Your Vocabulary
Is 9 a prime number? » This magical worksheet is the perfect introduction to addition. Kindergarteners will love it! They’ll read the numerical equation, then draw the equivalent to each number. There are five problems – perfect for beginners to get their feet wet in the world of pre-addition!
View
1st grade

Students will try their hand at counting with this worksheet. They’ll count the objects circled within each group, find the corresponding number, and circle that as well. All of the collections being counted and identified are fewer than 20 on this worksheet.
View 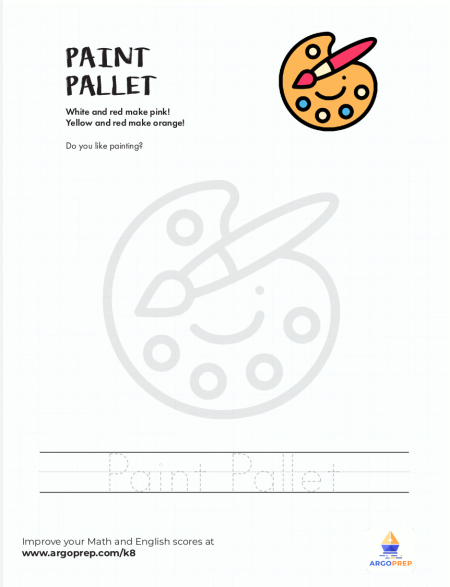 Inspire your children’s creativity and art with our paint pallet tracing worksheet. This is a splendid and easy learning tool to introduce your kids to paints, colors while strengthening their motor skills.
View 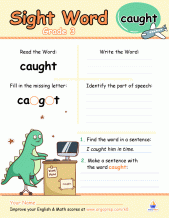 The “augh” sound and spelling are challenging, and words using it have “caught” quite a few readers and writers off-guard over the years. Help solidify your child’s understanding and correct usage of the word with this hilarious, slightly-clueless dinosaur! Kids will love it, and remember the word “caught” a lot more easily.
View 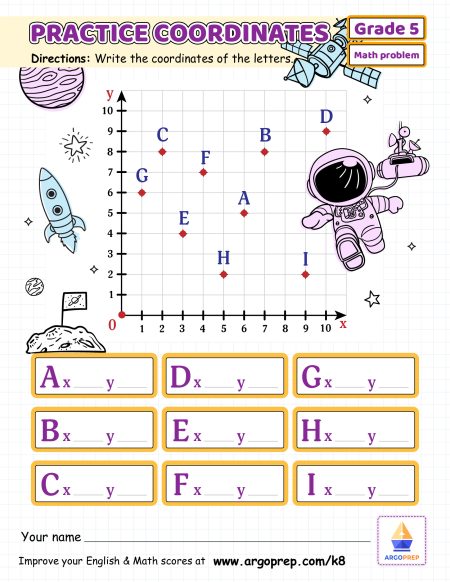 Astronaut Sara is getting ready for a spacewalk. Can you help her finalize her coordinate plane map so she can finish getting ready? She just needs help writing the coordinates for each of these letters.
View 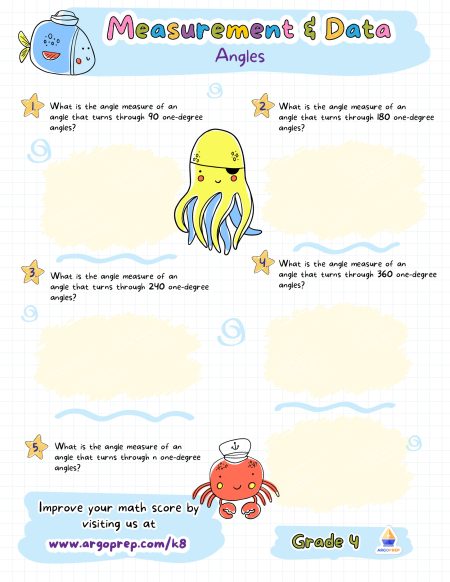 This two-page worksheet would make a great assessment or daily grade. The first page poses questions about the measurement of angles that turn at specific degrees. On the second page, students will read protractor graphics and write the measurement of the angle shown. The final question does require students to use their own protractor to…
View
3rd grade

Argh! These pirates need a little help plotting out their treasure. Students can use the pictures to graph the amounts on each coin. There are also a few questions to answer using the line point information. Treasures, ahoy!
View 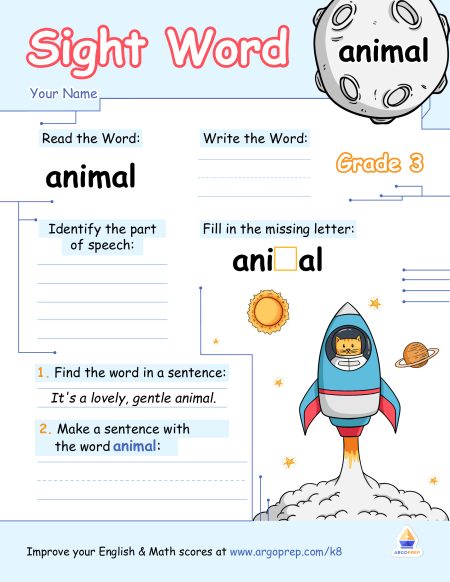 The cat’s out of the bag with this sight word worksheet! It’s no secret that this is a tool your third graders will adore. An important reading resource, this incredible tool will help your students to gain new sight word skills. It allows them to practice the word “animal” as they identify, read, trace, color,…
View 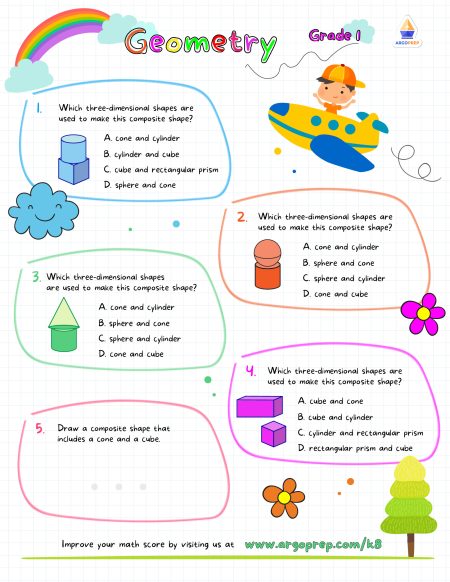 Students will identify which three-dimensional shapes are used to create larger composite shapes. Four of the five questions on this worksheet are multiple-choice, allowing students the opportunity to compare and contrast the written names of shapes like a cone, sphere, cube, cylinder, and rectangular prism. The final question asks students to create their own composite…
View 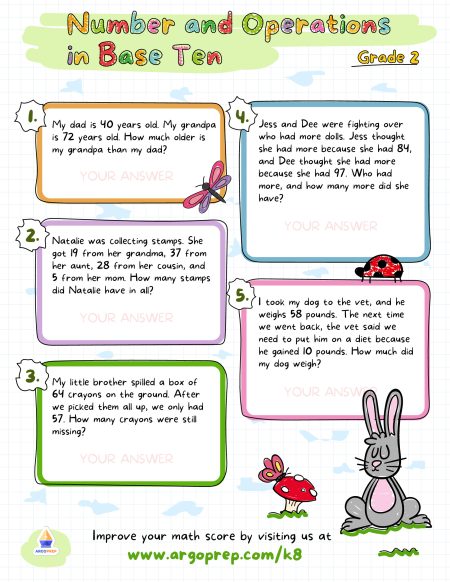 Butterflies are fluttering and bunnies are hopping through this math resource! Story problems are the focus, and students will have the chance to show what they know about addition and subtraction. Finding key words and determining the method to solve will be their first focus. Then they can find the answer to each word problem.…
View

Get ready for Grade 6 with our award-winning summer workbook! This workbook provides twelve weeks of comprehensive review for Math and English Language Arts to help your child get ready for six grade. Each week also includes activities for science and social studies that is designed to spark your child’s curiosity. This workbook is designed…
Shop Now
SALE
4th grade, 3rd grade

12 Weeks of Math, Reading, Science, Logic, and Fitness Updated for Summer 2022, prepare your child for Grade 4 with our award-winning Kids Summer Academy workbook by ArgoPrep. ArgoPrep’s 2022 Kids Summer Academy Series is designed to keep students engaged and prevent summer learning loss. More importantly, students will be introduced to Grade 4 concepts so they can be one step…
Shop Now
New
4th grade

12 Weeks of Math, Reading, Science, Logic, and Fitness. Updated for Summer 2022, prepare your child for Grade 3 with our award-winning Kids Summer Academy workbook by ArgoPrep. ArgoPrep’s 2022 Kids Summer Academy Series is designed to keep students engaged and prevent summer learning loss. More importantly, students will be introduced to Grade 3 concepts so they can be one step…
Shop Now
SAVE $13

10 min read
Simple Future Verb Tense
K8
Simple future is a tense that talks about the future. It is how we speak about things that have not yet happened. Simple future contains the word “will” to refer to something that has not yet taken place, and that is expected to happen. Next year, Sarah will go to college. You use the simple […]