Did you know that 13 is considered to be an unlucky
number in some countries? So much so that many
buildings, elevators and hotels around the world avoid labeling floors and rooms with number 13.

Also, 13 is a prime number! So, either you believe in 13’s bad luck or not, we are ready to discuss great things about this number.

A natural number is called a prime number if it is greater than 1, and it doesn’t have proper factors. For example, the first prime numbers are 2, 3, 5, 7, and 11.

Number 13 is prime because it doesn’t have proper factors. In other words, the only factors of 13 are 1 and itself. To be sure of it, we can use the following property.

On the other hand, prime numbers cannot be split into equal parts, each having more than one element. This is another way of verifying that 13 is a prime number:

Thus, the only way of splitting 13 stars into equal parts is putting one star in each of 13 parts. This means that 13 is a prime number!

Which class of prime number is 13?

Number 13 is a special kind of prime number since when we change the position of its digits, we get 31 which is again a prime number.

Number 13 can be classified into different classes of prime numbers. However, as we will see next, it doesn’t belong to any of the three classes that we mention below.

Since 13 is not in the right column, then 13 doesn’t have the form of a safe prime.

We invite you to read other articles on prime numbers, on our webpage, to find out which other prime numbers belong to these classes. Do you know that 7 is a prime number? 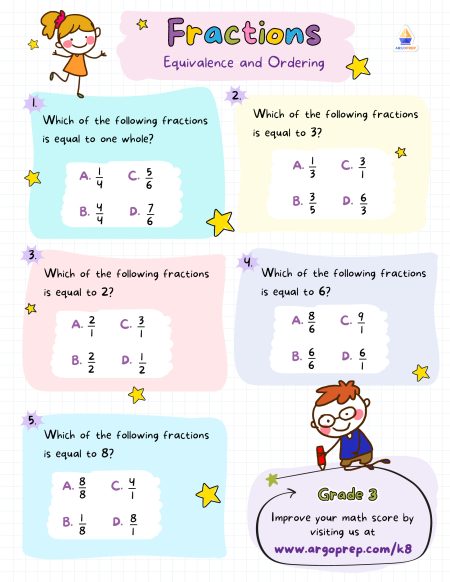 Fractions, fractions, and more fractions! Students will build confidence as they work on this learning tool which focuses on choosing the correct equivalent fraction from four given choices. A great practice, review, or assessment, this math worksheet will create fraction fanatics and is a great resource for your learners!
View Fantastic Fox is ready to learn! His backpack is on, his pencil has been sharpened, and it’s time to solve! Learners will love showing off their math skills as they find the area using square units. A great practice, review, or assessment, this is a fun resource you will want to share!
View 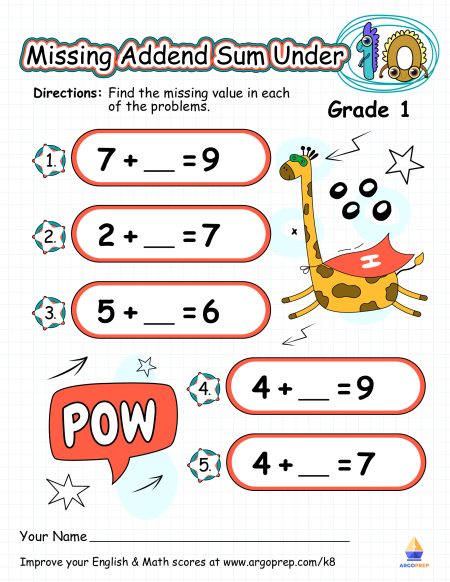 Just as Anti-Grav Giraffe defies gravity, your students can soar to adding success with this cute worksheet! It’s the perfect review for horizontal equations. All the sums are ten or fewer. Each equation is missing the medial addend. Add, add, and away!
View 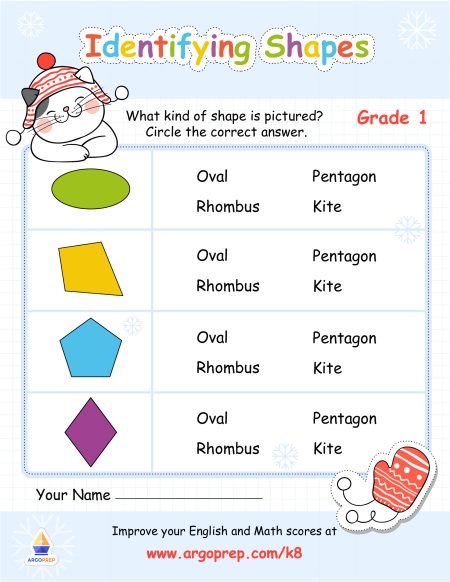 Say hello to your new geometric friends on our colorful printable worksheet. Our teaching resource is a splendid way of introducing 2D shapes and helping the students identify and label them correctly. Our practice sheets will soon have your learners identifying the tricky shapes correctly!
View 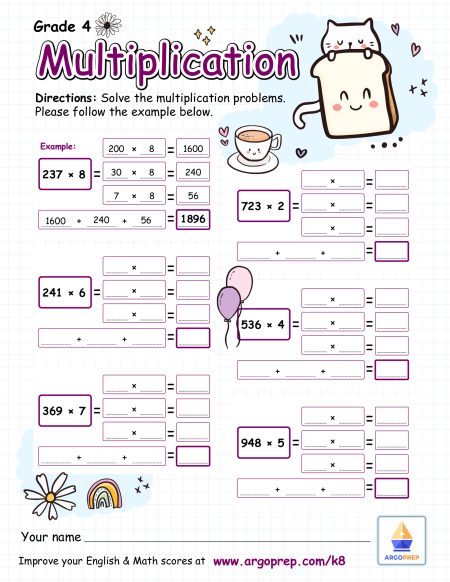 With her favorite meal and a cup of tea, this kitty just loves to start her mornings with multiplication. Fourth graders will use partial products to solve each three-digit by one-digit multiplication problem. Five problems are included for student practice. A model is provided as an example for students to use while solving each problem.
View 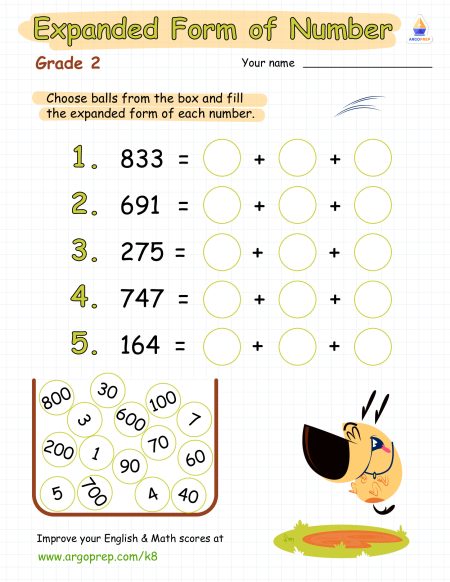 Doggo is playing a new game. He’s found this lovely mud puddle and wants to put all his toys in the mud and roll around in it himself. The problem is that when it’s time to tidy up Doggo gets a bit overwhelmed. Students can help by recording the numbers on each ball above in…
View 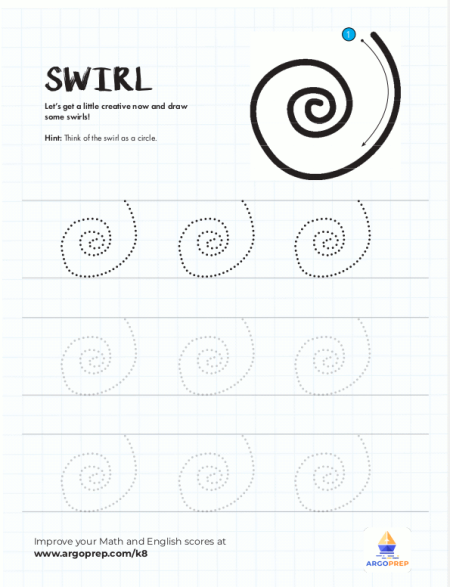 Take your kindergarteners for a little curvy ride in your classroom. Our swirl tracing activity will help strengthen their grip, refine their motor skills and help orient their movement. Don’t miss a fantastic teaching tool like this.
View
3rd grade

Students will need their sea legs for this colorful worksheet! They’ll use the picture graph to fill in a line plot, then answer the questions about the information. Note: Sea not included.
View 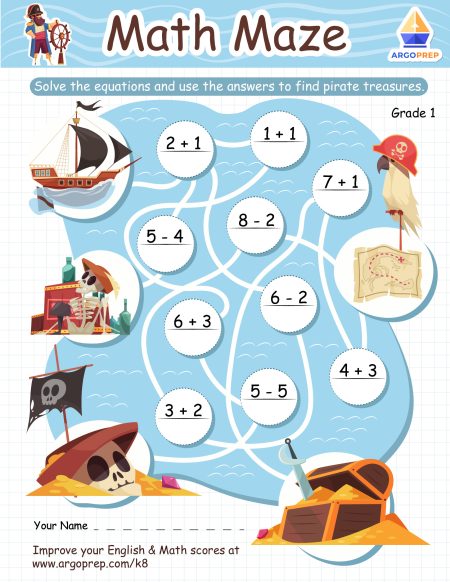 Your adventure starts here! Students will add and subtract their way across the treasure map. There are ten questions on this page, all with minuends and sums fewer than twenty. Eye patches not included!
View 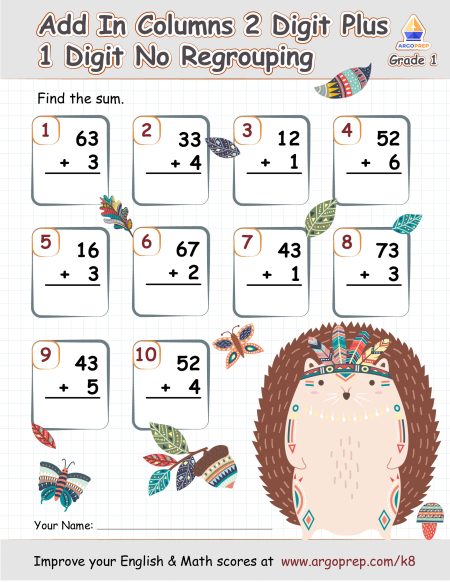 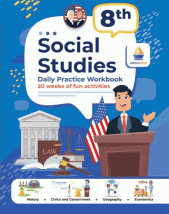 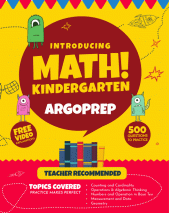 “Introducing Math!” by ArgoPrep is an award-winning series created by certified teachers to provide students with high-quality practice problems. Kindergarten math workbook is designed to provide you with a comprehensive over view of kindergarten mathematics. Our workbooks include topic overviews with instruction, practice questions, answer explanations along with free digital access to video explanations. Practice…
Shop Now
SALE
6th grade 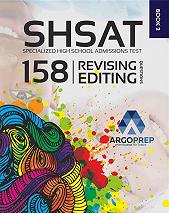 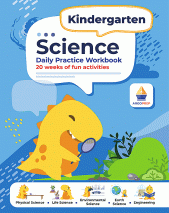 Introducing Math! by ArgoPrep is an award-winning series created by certified teachers to provide students with high-quality practice problems. This workbook is designed to provide you with a comprehensive overview of Grade 2 mathematics. Our workbooks include topic overviews with instruction, practice questions, answer explanations along with free digital access to video explanations. Practice in confidence – with ArgoPrep! Chapter 1…
Shop Now
SALE 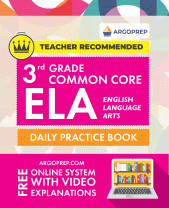 Introducing Math! by ArgoPrep is an award-winning series created by certified teachers to provide students with high-quality practice problems. This workbook is designed to provide you with a comprehensive overview of Grade 4 mathematics. Our workbooks include topic overviews with instruction, practice questions, answer explanations along with free digital access to video explanations. Practice in confidence – with ArgoPrep! Chapter 1 – Operations…
Shop Now

21 min read
Classroom Management Strategies
Blog Educators
As a teacher, you will often have to deal with students’ disruptive behavior. You will often find children running around or yelling at each other, which means you just can’t get a word in. A teacher’s inability to make students behave in an orderly manner is a sign of poor classroom management, which leads to […]