A natural number is called a prime number if it is greater than 1, and it doesn’t have proper factors. For example, the three prime numbers below 47 are: 37, 41 and 43.

Number 47 is prime because it doesn’t have proper factors. In other words, the only factors of 47 are 1 and itself. To be sure of it, we can use the following property.

If 𝒏 is a natural number, and neither of the prime numbers less than

Which class of prime number is 47?

Making operations with the digits of 47, we get 4 + 7 = 11 which is again a prime number. Moreover, we get the big prime number

Forty-seven can be classified into several classes of primes numbers. We will name three classes here, and then we will see to which of them number 47 belongs.

You can read about 37 prime number in our next article. 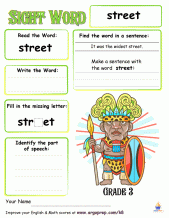 Take a trip down Success “Street” with this interactive worksheet! Sight words are key reading skills, and your students will gain confidence as they expand their knowledge with this bright interactive tool. They will identify, read, trace, color, and then write a sentence with the word “street.” Watch them walk the path towards success with…
View 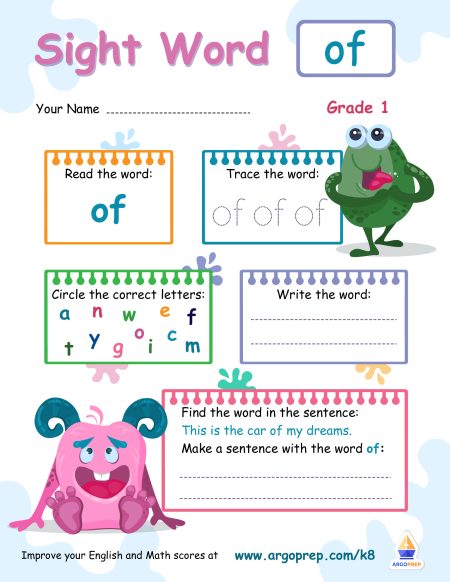 This is one “of” the best sight word tools you will find for your students! This colorful worksheet will help your students with sight words, which is an important reading skill. It allows them to practice the word “of” as they identify, read, trace, color, and write. Watch them gain confidence and enjoy seeing their…
View 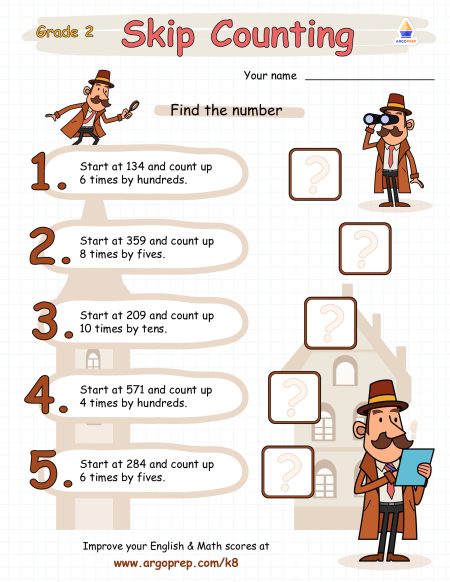 We all have academic strengths. Detective Le Sault’s is not math. Students can help him solve this important case by doing a little math-related detective work. It’s sure to be solved with their help!
View 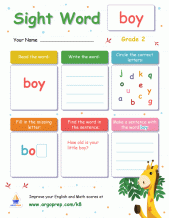 Everybody will love this sight word worksheet – every “boy” and every girl! This is a great review for second-graders. They’ll read, write, hunt for and find, as well as create a sentence containing the sight word “boy”. Oh, boy! Hope you enjoy!
View Impossible and unlikely, what’s the potential probability? Learners will decide with this learning resource! They will carefully answer these ten problems and focus on a variety of questions. Students can work independently, in partners, or small groups. It’s a great learning opportunity for your seventh graders that you won’t want them to miss out on!
View
3rd grade

Students will be standing in “line” to complete this sight word worksheet! They’ll stay busy practicing the sight word “line” by reading, writing, searching for the word in a sentence, and creating their own sentence. This worksheet also has a “beary” cute graphic. Be warned – students may enjoy this worksheet so much that they…
View 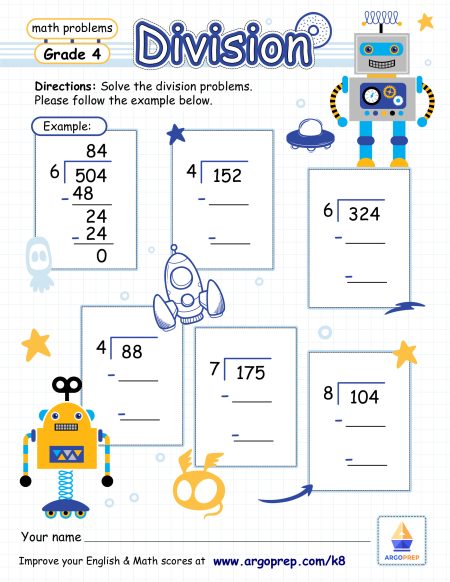 Cogs and Springs are in charge of parties at the robot factory. They are getting special “goodie bags” together for the robots for each of the six divisions. Each goodie bag gets it’s own number of prizes (snacks and tools, of course – chocolate-covered bolts, buttered batteries, and squishy sparkplugs – the usual). Students can…
View 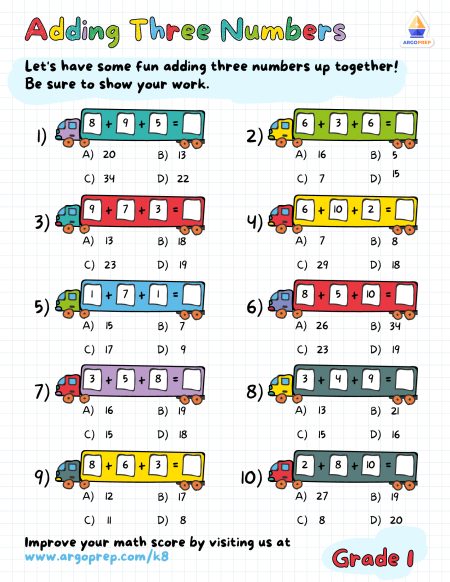 These two worksheets are leveled to challenge students who are still working to use pictures to add, as well as advanced students who are addition experts. Each is composed of ten multiple-choice problems. The first set of problems are advanced, three, one- and two-digit addition problems. The second two-page set is illustrated, and the sums…
View 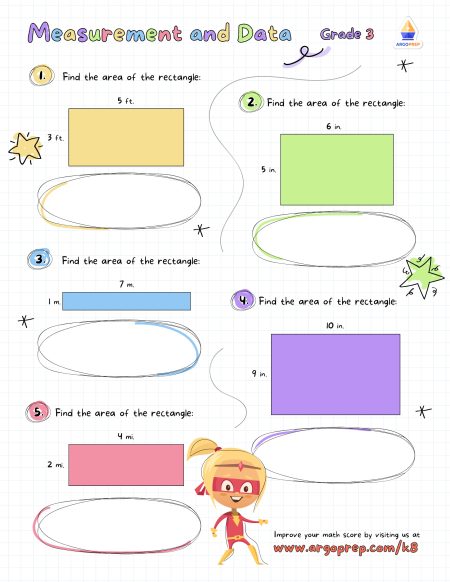 Be an Area Superhero!

Be an Area Superhero!

Hey there, superstar! Are you ready to show what you know about area? Help this superhero as she climbs new heights and reaches for the stars. Be a superhero, look carefully at each problem, and then decide how to find the area. A great practice, review, or assessment, this tool will show what a STAR…
View 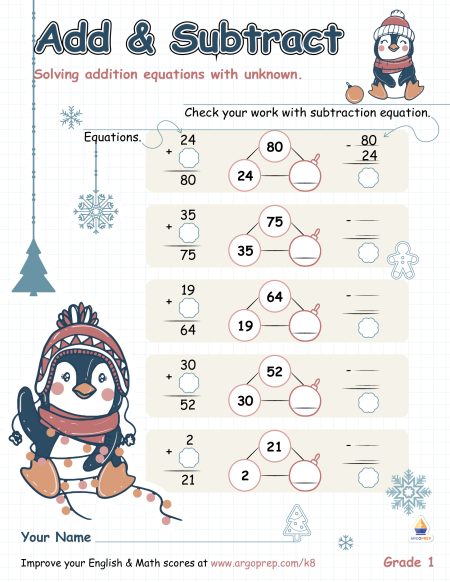 The Christmas Penguins have a little problem. Some of the lights are burnt out on the strand meant for their Christmas tree! They have replacement lights, but they have to pay one correct answer for each new bulb. Students can help the penguins by solving these addition and subtraction problems and completing the number bond.…
View 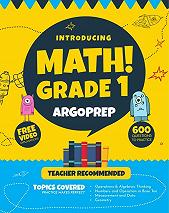 Introducing Math! by ArgoPrep is an award-winning series created by certified teachers to provide students with high-quality practice problems. This workbook is designed to provide you with a comprehensive overview of Grade 1 mathematics. Our workbooks include topic overviews with instruction, practice questions, answer explanations along with free digital access to video explanations. Practice in confidence – with ArgoPrep! Chapter 1 –…
Shop Now
SALE
4th grade

“Introducing Math and Science” by ArgoPrep is an award-winning series created by certified teachers to provide students with high-quality practice problems. The 3rd Grade Math and Science workbook is designed to provide you with a comprehensive overview of 3rd grade mathematics and science. Our workbooks include topic overviews with instruction, practice questions, answer explanations along…
Shop Now
SALE
4th grade

Our science workbooks offer students with 20 weeks of practice of various science skills required for first grade including Physical Science, Life Science, Earth & Space Science, and Engineering. Engaging with the topic: Read a short text on the topic and answer multiple choice questions. Exploring the topic: Interact with the topic on a deeper level by…
Shop Now
SALE
5th grade, 4th grade

12 Weeks of Math, Reading, Science, Logic, and Fitness Updated for Summer 2022, prepare your child for Grade 5 with our award-winning Kids Summer Academy workbook by ArgoPrep. ArgoPrep’s 2022 Kids Summer Academy Series is designed to keep students engaged and prevent summer learning loss. More importantly, students will be introduced to Grade 5 concepts so they can be one step…
Shop Now
SAVE $30
3rd grade

Get ready for Grade 7 with our award-winning summer workbook! This workbook provides twelve weeks of comprehensive review for Math and English Language Arts to help your child get ready for seventh grade. Each week also includes activities for science and social studies that is designed to spark your child’s curiosity. This workbook is designed…
Shop Now

10 min read
Teaching Kids How To Recharge And Practice Self-Care
K8
Remember how stressed you were in school? All of the homework, tests and quizzes, projects, plus making sure that you had time for your friends, or having enough free time to enjoy your hobbies? Today, kids are even more stressed in school than when we were students. There are many reasons for that — but, […]

6 min read
Is 37 a prime number?
Blog K8
Did you know that the average normal temperature of the human body is 37° C? This is only one of many curiosities about number 37.In mathematics, 37 is known as the 12th prime number. In what follows, we will study some properties of 37 as a prime number. We will start recalling some definitions that […]