Why is that? Because, as we will see next, 63 is not a prime number!

A natural number is called a prime number if it is greater than 1, and it doesn’t have proper factors. For example, the prime numbers closer to 63 are: 61 and 67.

There are several ways of showing that 63 is not a prime number. For example, we can use the following property, that we discussed in our Prime Numbers article.

This means that 63 is a composite number. Thus, 63 has proper factors. In order to find them, we will use the following property.

If n is a composite number, then there is a prime number less than $$\sqrt n$$ that divides n.

Another way of understanding why 63 is not prime, is recalling that a prime number of objects cannot be arranged into a rectangular grid with more than one column and more than one row.

As we see below, 63 stars can certainly be arranged into a rectangular grid with, for example, 3 rows and 21 columns, or 7 rows and 9 columns. This means that 63 is not a prime number!

Occurrences of 63 among the prime numbers

On the other hand, 63 has several properties that make it seem a prime number, although it is not:

As we can see, 63 tries really hard to look like a prime!

Finally, we list below the first few occurrences of 63 among the prime numbers. This way, you can have them at hand when deciding if some numbers related to 63 are primes.

Do you know that 67 is a prime number?

No, because it has proper factors.

No, because 63 is not a prime number. The focus of this amazing learning tool is AREA! Learners will solve a variety of problems to determine the correct answer to each. With illustrations, multiple choice questions, and opportunities to write and explain, your students are sure to love this worksheet and you will too!
View 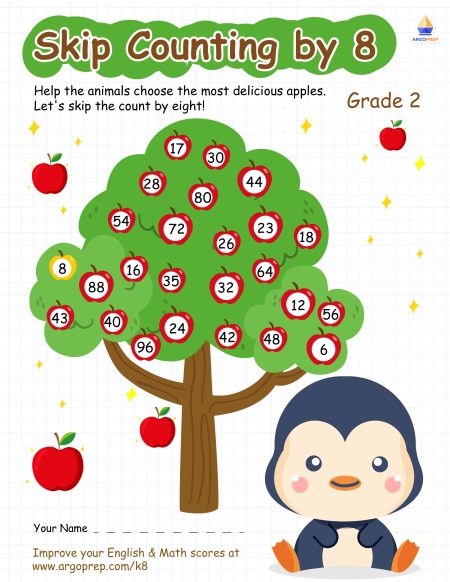 Skip Counting is a pre-multiplication skill – and students love it! This worksheet focuses on skip counting by groups of eight. Students will draw a path from the first apple (beginning with eight) and continue through the multiples. The final number in this grouping is 96.
View 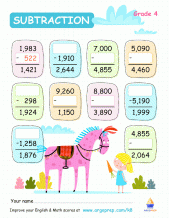 This ten-problem worksheet focuses on engaging students while allowing them to practice subtracting. Each minuend is a four-digit number. The subtrahends are all either three- or four-digit numbers. Students will love the colors and bright features as the review their subtraction skills!
View 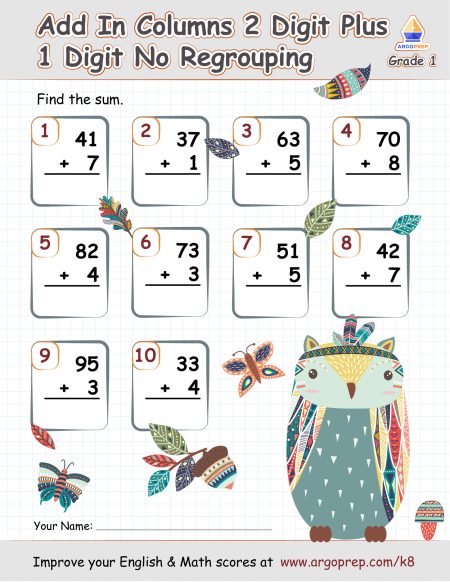 Give a Hoot for No Regroup(ing)!

Give a Hoot for No Regroup(ing)!

This beautiful worksheet is perfect for students just learning to add two-digit numbers plus one-digit. There are ten problems, all set up in vertical columns. Of course, as a beginning double-digit worksheet, no regrouping is required. “Whoo” will love this worksheet? Your kids!
View 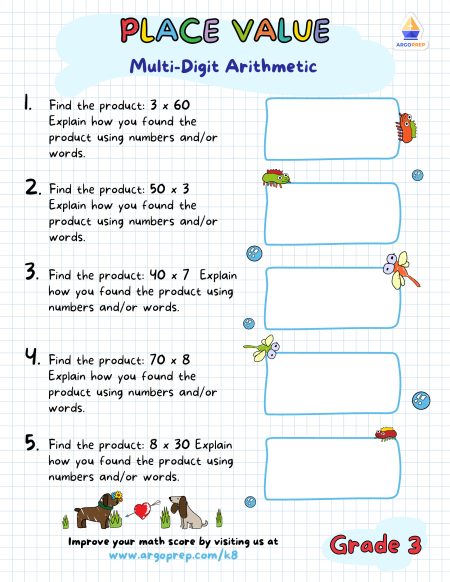 Students can act like detectives as they work to find the product in each given problem. They will utilize their higher-level thinking skills by explaining how they came up with each answer. This makes a fantastic practice resource or consider using it for enrichment opportunities!
View
1st grade

This cool practice sheet is way too hip to be forgotten! Kids will find all the equally divided shapes on the page. Then, they’ll color them to indicate they’re equal! This practice is steampunk and cyberpunk approved.
View 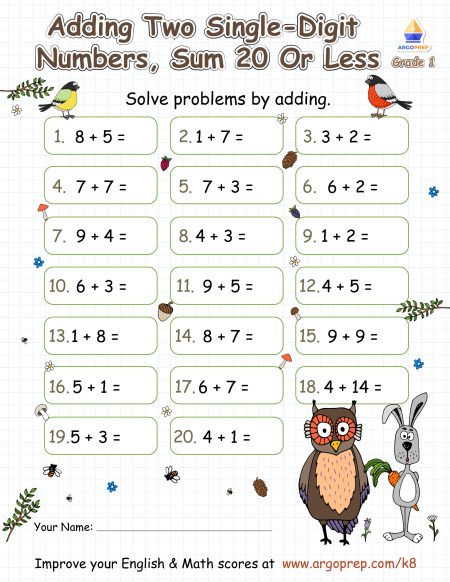 Need a review sheet for the beginning of the year with first-graders? This is the one! Students will add to solve twenty equations on this worksheet. All the problems are formatted horizontally so they look familiar. The addends in these problems are all single-digit, and none of the sums are greater than twenty. Kids (and…
View 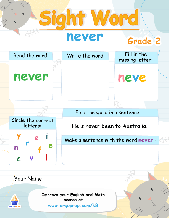 Students “never” stop learning, and this will be a worksheet that they are sure to love! Sight words are an important reading tool, and this resource has been designed to effectively teach in multiple ways. Students will identify, read, trace, color, and write a sentence focusing on the word “never.” With new confidence and excitement,…
View
1st grade

Adding whole groups of ten with ones is a great way to begin two-digit addition. Your child will add without regrouping, and focus on zero plus a one-digit number. Adding this way builds confidence because the numbers are larger (yet still within 100).
View

“Introducing Math and Science” by ArgoPrep is an award-winning series created by certified teachers to provide students with high-quality practice problems. The 2nd Grade Math and Science workbook is designed to provide you with a comprehensive overview of 2nd grade mathematics and science. Our workbooks include topic overviews with instruction, practice questions, answer explanations along…
Shop Now
SALE
2nd grade, 1st grade

Get ready for Grade 2 with our award-winning summer workbook! This workbook provides twelve weeks of comprehensive review for Math and English Language Arts to help your child get ready for second grade. Each week also includes activities for science and social studies that is designed to spark your child’s curiosity. This workbook is designed…
Shop Now
SALE
1st grade

“Introducing Math and Science” by ArgoPrep is an award-winning series created by certified teachers to provide students with high-quality practice problems. The 1st Grade Math and Science workbook is designed to provide you with a comprehensive overview of 1st mathematics and science. Our workbooks include topic overviews with instruction, practice questions, answer explanations along with…
Shop Now
SALE
4th grade

Our science workbooks offer students with 20 weeks of practice of various science skills required for first grade including Physical Science, Life Science, Earth & Space Science, and Engineering. Engaging with the topic: Read a short text on the topic and answer multiple choice questions. Exploring the topic: Interact with the topic on a deeper level by…
Shop Now
SALE
3rd grade

“Introducing Math and Science” by ArgoPrep is an award-winning series created by certified teachers to provide students with high-quality practice problems. The 3rd Grade Math and Science workbook is designed to provide you with a comprehensive overview of 3rd grade mathematics and science. Our workbooks include topic overviews with instruction, practice questions, answer explanations along…
Shop Now
New
4th grade

Get ready for Grade 1 with our award-winning summer workbook! This workbook provides twelve weeks of comprehensive review for Math and English Language Arts to help your child get ready for first grade. Each week also includes activities for science and social studies that is designed to spark your child’s curiosity. This workbook is designed…
Shop Now

5 min read
50 Rainy Day Activities for Kids
K8
Nothing spoils summer fun like a day stuck inside because of bad weather. If you have no rainy day activities planned, things can go from bad to worse. It seems like every time I have outdoor activities planned for my family; we get rained out. Well, maybe not every single time, but plenty of beach […]