But, why is 83 a prime number? That’s what we will study next.

A natural number is called a prime number if it is greater than 1, and it doesn’t have proper factors. For example, the two previous and two next primes to 83 are: 73, 79, 89, and 97, respectively.

Number 83 is prime because it doesn’t have proper factors. In other words, the only factors of 83 are 1 and itself. To be sure of it, we can use the following property.

Which class of prime number is 83?

Eighty-three can be classified into several classes of primes numbers. We will name three classes here, and then we will see to which of the number 83 belongs.

Do you know that 79 is a prime number? Divide the Line and Label

Divide the Line and Label

Students often struggle with understanding the concept of fractions. They really need to be able to “see” the fraction. Kids can use number lines to help with this. On this worksheet, they’ll divide each of the five number lines into equal sections according to the bottom number in each fraction. Then they’ll label the fraction…
View 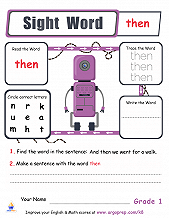 Your students will read and “then” succeed with this learning resource! Learners will become confident readers as they identify, read, trace, color, and write a sentence with the word “then.” Students will soar to sight word success with this effective learning tool!
View 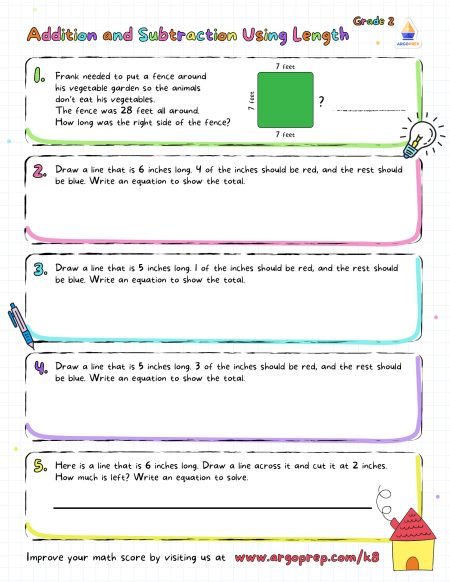 These questions are pretty simple for beginning addition and subtraction of length, so they are perfect for earlier in the year or kids who need more practice. They are word problems, and they all involve single-digit numbers. There is one question that asks for a missing side of a square. The length of the other…
View
1st grade, 2nd grade, 3rd grade

Let’s team up and help our little children develop fine writing, reading and spelling skills. Remember, well-trained children of today are the promising future of tomorrow. What better place to start training them for bigger achievements than with cursive handwriting practice? Grab our printable worksheet today and help them master the art effortlessly!
View The shapes in these five challenges are not quite complete. Students will follow the directions to finish them off – and transform them from one shape to another! This worksheet gives your child’s artistic eye a workout while also helping them improve their spatial and cognitive awareness.
View 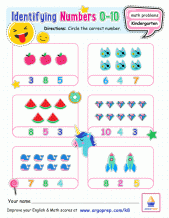 Kindergarten kiddos will love this counting fun! They’ll count each group of objects and circle the number that matches the count. All of these numbers are between zero and ten – perfect for beginning counters!
View 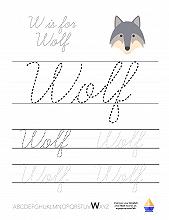 Cursive W is for Wolf

Cursive W is for Wolf

Cursive writing is making a comeback! It’s a great practice for kids. There are quite a few words that use the letter Ww, so it’s a good one to practice. This worksheet uses three lines. The middle line is dotted. Writers will practice by tracing a dark dotted line, a light dotted line, and a…
View 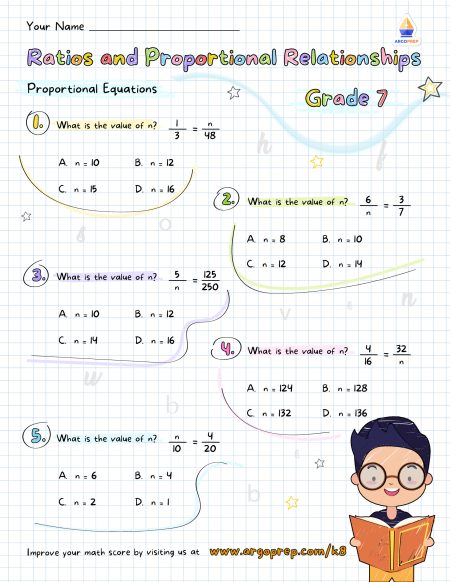 All About Proportional Equations

All About Proportional Equations

Your seventh grade students will be all about unit rates with this worksheet! Learners will work carefully to calculate the difference between two units to find the unit rate. They may work individually, in partners, small groups, or during a whole class lesson. Let this set them up for success with unit rates!
View 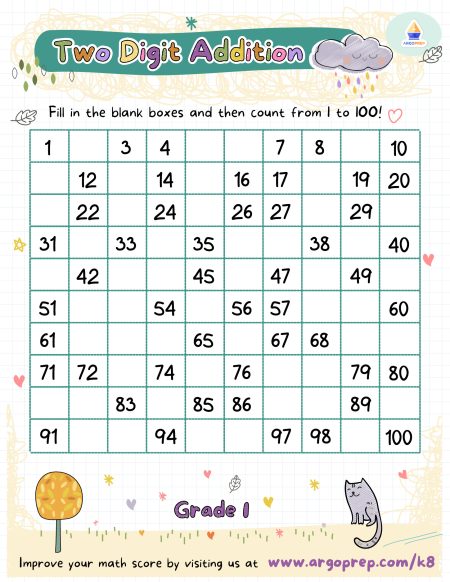 It’s autumn, the leaves are falling, and it’s time to count to one hundred! Using the hundreds chart, learners will fill in the missing numbers. Encourage students to look for patterns as they work their way through the pretty fall scene.
View 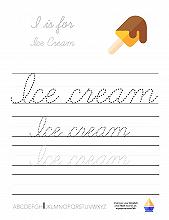 Make your students competent cursive writers who can not only spell well, but also write well and recognize words of every size. In a world where typing has taken our human skills, our cursive worksheet ensures your students stand distinguished with excellent motor skills.
View

Introducing Math! by ArgoPrep is an award-winning series created by certified teachers to provide students with high-quality practice problems. This workbook is designed to provide you with a comprehensive overview of Grade 4 mathematics. Our workbooks include topic overviews with instruction, practice questions, answer explanations along with free digital access to video explanations. Practice in confidence – with ArgoPrep! Chapter 1 – Operations…
Shop Now
SALE
5th grade, 4th grade

12 Weeks of Math, Reading, Science, Logic, and Fitness Updated for Summer 2022, prepare your child for Grade 5 with our award-winning Kids Summer Academy workbook by ArgoPrep. ArgoPrep’s 2022 Kids Summer Academy Series is designed to keep students engaged and prevent summer learning loss. More importantly, students will be introduced to Grade 5 concepts so they can be one step…
Shop Now
SALE
Kindergarten

“Introducing Math and Science” by ArgoPrep is an award-winning series created by certified teachers to provide students with high-quality practice problems. The Kindergarten Math and Science workbook is designed to provide you with a comprehensive overview of kindergarten mathematics and science. Our workbooks include topic overviews with instruction, practice questions, answer explanations along with free…
Shop Now
SAVE $8

ArgoPrep’s Kindergarten Math workbook prepares your child to learn basic foundational mathematical skills! Our workbook offers your child dedicated practice for number recognition from 0 to 20, number tracing, word tracing, counting, addition and subtraction skills, and much more. Your child will have a very fun time completing our award-winning workbook! This workbook was organized as…
Shop Now
SAVE $30
6th grade

Students will explore science topics in depth with ArgoPrep’s 6 E’S to build science mastery. Engaging with the topic: Read a short text on the topic and answer multiple choice questions. Exploring the topic: Interact with the topic on a deeper level by collecting, analyzing and interpreting data. Explaining the topic: Make sense of the topic by explaining and beginning…
Shop Now
SALE
7th grade

Sharpen your skills for Grade 7 over the winter break with our award-winning Winter Series workbook! This beautifully designed workbook (printed in full color) provides your child two weeks of practice activities for math, reading, science and social studies to work on during the winter break. We understand how coronavirus has impacted your child’s education…
Shop Now
SALE
4th grade

Our science workbooks offer students with 20 weeks of practice of various science skills required for first grade including Physical Science, Life Science, Earth & Space Science, and Engineering. Engaging with the topic: Read a short text on the topic and answer multiple choice questions. Exploring the topic: Interact with the topic on a deeper level by…
Shop Now

9 min read
Multiples of 17
Blog K8
Learning about multiples is one of the basic yet important concepts in mathematics. When we have mastered the concept of multiples, we will be able to confidently and competently tackle the more complex topics in mathematics. This time, we will look into the multiples of another interesting number – the number 17. Aside from being […]