Eleven is the smallest non-repeating two-digit number and the first two-digit prime
number. In Pythagorean numerology, the number 11 has a negative connotation since it is placed between the two promising and significant numbers – 10 and 12.

While 10 symbolizes completeness and perfection, 11, on the other hand, represented exaggeration, indulgence, and human sin. It was also regarded as a symbol of internal strife and insurrection.

For some, the “11th hour” implies a sense of urgency because the clock is approaching twelve o’clock – which can mean that this is the final hour to complete tasks.

On the brighter side, the number 11 became somewhat famous because of the American show called “Stranger Things,” wherein one of the characters was named “Eleven.”

Eleven may have a negative implication for some people, but it is still an interesting and important number to take note of. Do you want to journey with us to see how beautiful and meaningful the multiples of 11 are? Hop on as we learn exciting stuff about this remarkable number!

One thing that we are most certain about multiples of 11 is that they will always be a whole number. They result from any natural numbers multiplied by 11, which can be expressed as 11n. It is a sequence wherein the difference between two consecutive numbers is 11.

Are you know getting excited on know how to find multiples of 11?

How to find the multiples of 11?

Skip counting is done by repeatedly adding 11 as many times as necessary.
To find the first five multiples of 11 using skip counting, we are going to start the count at 11. Then, adding 11 to 11 will give us 22.

On the other hand, we can use a different approach where we just multiply 11 to any positive and negative integer.

More so, if we are told to find the negative 156th multiple of 11, it is easier to use the multiplication method instead of skip counting.

This table shows that no matter what method you use, you will always come up with the same results.

What an incredible and mind-blowing discovery, right?

We know that there are is an infinite number, and so do the multiples of 12. The following shows a list of the first 30 multiples of 12 generated by multiplying 12 by numbers ranging from 1 to 30.

Can you see any other pattern that will help us easily distinguish that a number is a multiple of 11?

Alexa is tasked to count all the collected blueberries of her family. There are six baskets of blueberries. The first basket contains 11 blueberries; the second one has 22 blueberries, and so on. How many blueberries did Alexa’s family collect?

For us to know the total number of blueberries Alexa’s family has collected, we should take note that the six baskets contain blueberries that are in the sequence of multiples of 11. Thus, the five baskets have 11, 22, 33, 44, 55, and 66 blueberries.

Now, all we need to do is add all the blueberries inside the baskets. Thus,

Are you getting the hang of it already? That’s good as we are going to try to solve
another problem.

Sabrina is preparing herself for a math competition. She has 65 days to do training and practice. She pledges to train herself to do mental math every day.

On her first day, she plans to solve 11 problems; 22 on the following day, 33 on the third day, and so on. How many math problems does Sabrina need to practice before her competition?

We need to find the number of math problems Sabrina needs to solve on her 65th day of training. In the given problem, we can take note that the math problems are increasing by 11 every single day.

Thus, we can say that it is in the sequence of multiples of 11.

Therefore, Sabrina needs to solve 715 math problems using mental math. That’s a lot of math problems in a day, but we will surely root for Sabrina to win that competition!

Now, we are also rooting for you that you can ace these three practice exercises!

Which of the following is a multiple of 11?

Multiples of 11 have a units digit of 1.

The smallest multiple of 11 is the number itself – which is 11.

To find the nth multiple of 11, multiply 11 to any positive or negative integer.

This robot-themed worksheet is a great practice for writing fractions! Your child will count the total number of boxes for the denominator (bottom number). Then they’ll count the shaded boxes for the numerator (top number). Fraction fun!
View
2nd grade

Your students will gain new color knowledge with this sight word worksheet! Allow them to dive in and build confidence as they take on this worksheet. They will identify, read, trace, color, and then write a sentence with the word “green.” Let them show you that the grass is greener with this one!
View 9 will look really fine once your children practice it on our super interesting tracing worksheet. Give them a fun activity and plenty of handwriting practice on the additional lines through our worksheet.
View 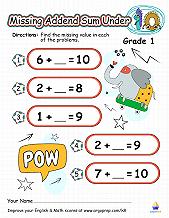 Students will love this skateboarding super-elephant! They’ll fill in the missing addend in each of the five equations. It’s great practice!
View It’s the school day the dragons have really been waiting for – flying day! Green dragon and Purple dragon want to add their miles together for each day they fly over the next five days. Can your students help them find the totals? The dragons are just WAY too busy flying around to do this…
View 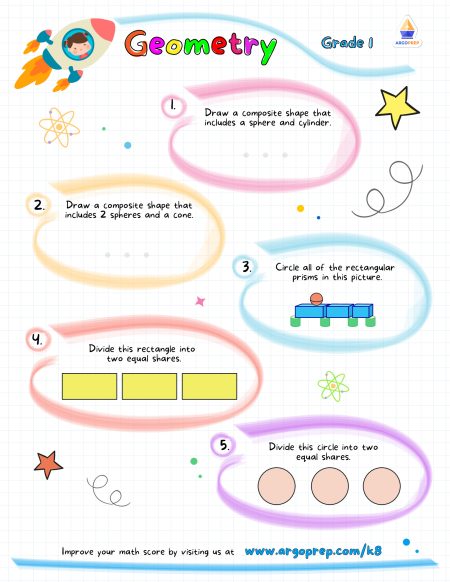 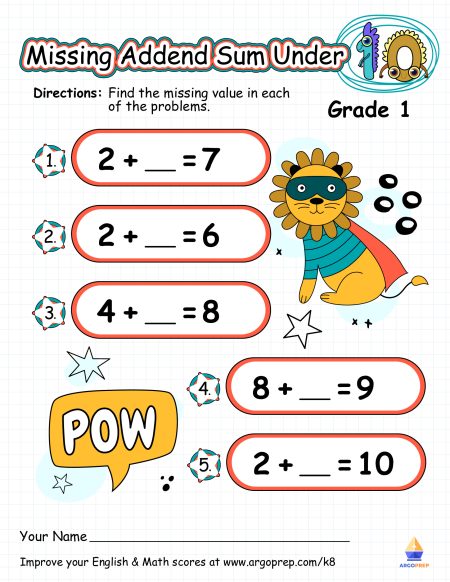 Nothing But the Facts for Fantastic Lion

Nothing But the Facts for Fantastic Lion

This flyin’ lion loves finding missing addends for these facts! Students will enjoy it, too. There are five equations, each missing the middle number. Students will fill in the blank, making sums that are ten or less.
View 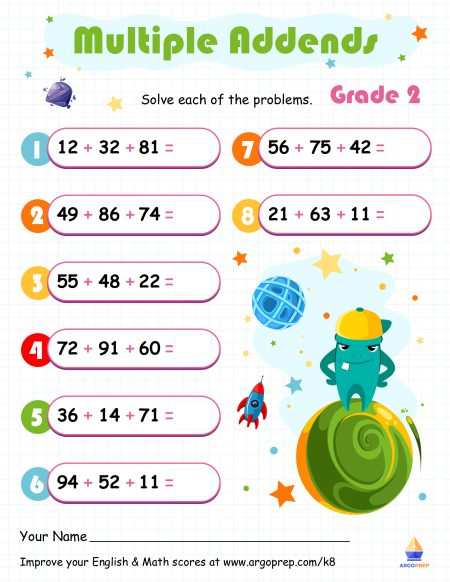 Students may think these problems look a little alien at first. There are three two-digit addends in each equation. They aren’t as foreign as one might fear. It’s all just addition, after all! There are seven free-answer questions on this worksheet.
View 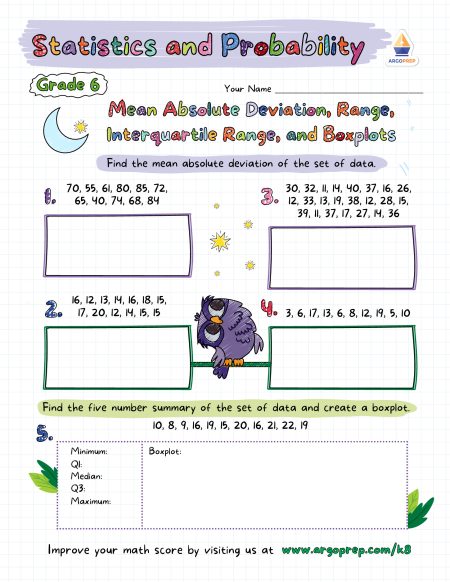 Students will find the mean absolute deviation of the sets of data on these worksheets. They will show they are as wise as owls as they work their way through these two pages of worksheets filled with five questions each. These worksheets will have 6th graders practicing or reviewing until they show they have all…
View 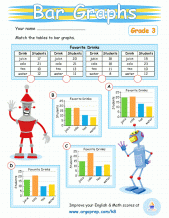 The kids these days – they love their data! Students will love these rambunctious robots! They’ve taken polls in four third-grade classes to decide which of the four types of drinks are the favorites. Your students will take the data they’ve collected and match it with the bar graphs below.
View

12 Weeks of Math, Reading, Science, Logic, and Fitness Updated for Summer 2022, prepare your child for Grade 6 with our award-winning Kids Summer Academy workbook by ArgoPrep. ArgoPrep’s 2022 Kids Summer Academy Series is designed to keep students engaged and prevent summer learning loss. More importantly, students will be introduced to Grade 6 concepts so they can be one step…
Shop Now
SALE
2nd grade

Introducing Math! by ArgoPrep is an award-winning series created by certified teachers to provide students with high-quality practice problems. This workbook is designed to provide you with a comprehensive overview of Grade 8 mathematics. Our workbooks include topic overviews with instruction, practice questions, answer explanations along with free digital access to video explanations. Practice in confidence – with ArgoPrep! Chapter 1 –…
Shop Now
New
1st grade

Get ready for Grade 5 with our award-winning summer workbook! This workbook provides twelve weeks of comprehensive review for Math and English Language Arts to help your child get ready for fifth grade. Each week also includes activities for science and social studies that is designed to spark your child’s curiosity. This workbook is designed…
Shop Now
New
4th grade

6 min read
Types of Triangles
Blog K8
We are going to be talking about triangles. Triangles are a two dimensional shape with three sides and three angles. These sides may be different lengths and the angles may be different measures. If you and a friend were to each draw a triangle, they may not be the same! There would be some features […]

5 min read
Capital vs. Capitol – What Should I Use?
Blog K8
Capital or capitol? Where should I go or what should I use? Do you encounter such questions often? If you do, then welcome to the club. We’re English language learners too and just like you, we too find homophones quite tricky. Perhaps the fact that they sound the same makes it challenging at times to […]