Twenty-one is a composite number with proper divisors 1, 3, and 7. It is a triangular, octagonal, and a Fibonacci number. It is considered as a triangular number because the sum of the first 6 counting numbers 1, 2, 3, 4, 5, and 6 is equivalent to 21.

In many cultures, activities, religions, and fields, numbers have distinct symbolism and significance. In order for us to understand the meaning of number 21, we need to discover first the meaning behind numbers 2 and 1. Number 2 is associated with partnerships, cooperation, diplomacy, and trust, whereas number 1 is associated with new beginnings and a hopeful mindset.

Number 21 is a reminder to take care of your own beliefs and thoughts because they are the ones responsible for constructing your own reality. Thinking positively will also attract positive things towards you.

So… are you ready to attract new positive learning? Let’s go as we journey to another magical mathematical lesson about multiples of 21!

Multiples of any number can be a positive or negative number as integer ranges from negative to positive infinity. More so, the difference between two consecutive numbers is always 21.

Now, let us continue our mathematical adventures in finding multiples of 21!

How to find the multiples of 21?

Now that we’ve properly defined what it means to say that a number is a multiple of 21, let us now determine any multiples of 21. Multiples of 21 can be determined using two methods: repeated addition and multiplication.

Skip counting, often known as repeated addition, is done by adding 21 as many times as necessary. The diagram below shows how to perform repeated counting.

It’s a very simple method, isn’t it? But how about finding the 153rd multiple of 21? Are we going to repeatedly add 21 for 153 times? Of course not – that’s why there is another method called multiplication!

We have previously defined that a multiple of 21 is generated by multiplying 21 to any integer. In essence, any number that can be expressed in the form 21n is a multiple of 21 – where n is an integer.

Consider the table below. Listed are the first five multiples of 21 that is generated using repeated addition and multiplication method. Observe how the two methods are different but will always have the same result.

See… finding multiples of 21 is very straightforward and easy to learn, right?

A 21-gun salute is a military honor bestowed on royalty or international leaders? It originated way back in the 17th century. The number 21 came from the tradition of galley ships emptying their cannons as a message of peace to distant ports. When doing the 21-gun salute, the gap between successive guns is 5 seconds.

What does it feel like to have a 21-gun salute? Guess we’ll never know, but this is such an amazing discovery!

Integers have an endless number of possibilities. Hence, listing all the possible multiples of 21 is pointless. We have, however, created a list of the first 30 multiples of 21 which is generated by multiplying the integers 1 to 30 by 21.

Now, let’s try solving some word problems that we may encounter in our daily lives. Are you ready?

Danerie bought a food pack for $21 to donate to typhoon victims. If he bought 345 food packs, how much did Danerie spend?

Therefore, Danerie spent $7,245 on food packs to donate to the typhoon victims. He is one generous gentleman, isn’t he?

Now, let’s see if you have learned something today by answering these 3 short questions!

Which of the following is not a multiple of 21?

Alyssa is answering a worksheet that has 21 questions. The time allotted to answer each question is 3 minutes. What will be the total time provided to finish the test?

To find any multiples of 21, multiply 21 to any positive or negative integer.

No, multiples of 21 can be an even or odd number. This is because if we multiply an even integer to 21, it will also result in an even number. 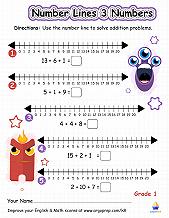 An Addend for Each Eye

An Addend for Each Eye

There’s a three-eyed monster on this worksheet who loves three-addend addition! Students will like it, too! Each of the five problems has its own number line which they can use to solve each addition problem. There are no sums greater than twenty.
View 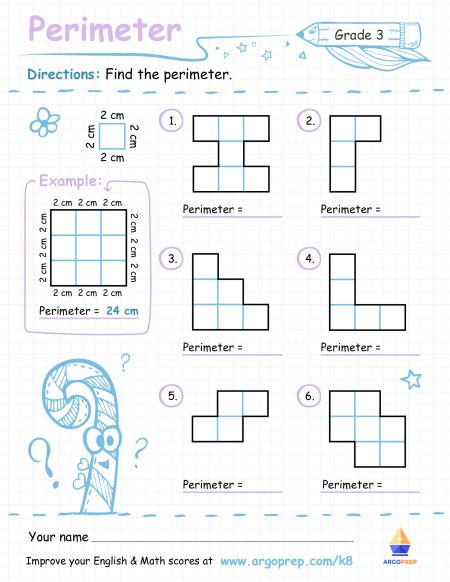 Share your knowledge of perimeter by finding the perimeter of these six two-dimensional shapes! Pay close attention because the side of each square is equivalent to not one, but TWO centimeters! Students will find the perimeter of each shape by adding each shapes side length’s together. An example is provided as a model for students.
View Are You Absolutely Positive?

Are You Absolutely Positive?

Students find the absolute value for the six numbers on this worksheet. This worksheet will have 6th graders positively shine as they complete the problems with ease. This worksheet is great for an introduction to positive and negative numbers. Or it can be a great review or practice page as well!
View 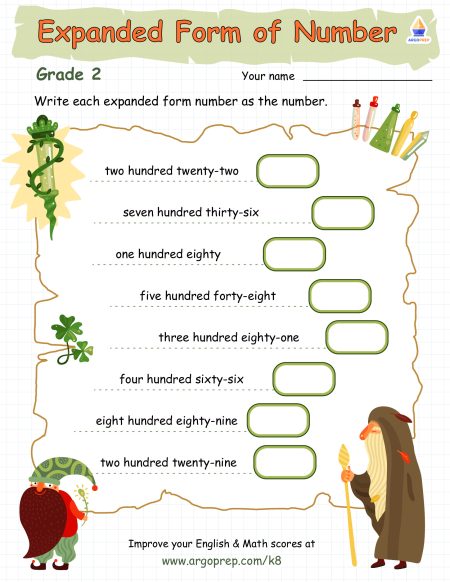 Eli Elf’s enchanted forest is full of numbers just waiting to be expanded. Not even the magic sorcerer can help expand these numbers! Read each expanded number in word form, and then write it in standard form. There are eight enchanted numbers for students to write!
View 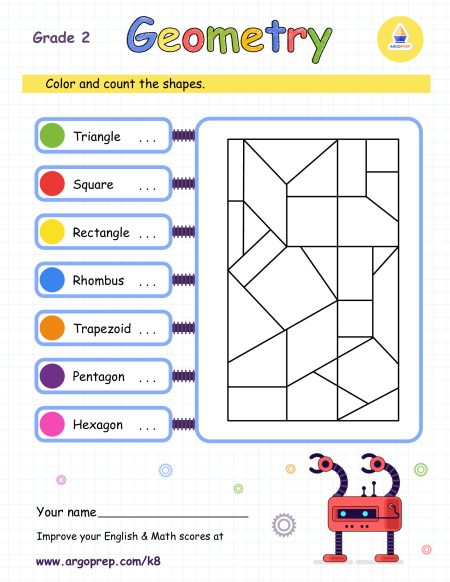 Ringo Robot’s Factory produces shapes of all sides and lengths. These shapes seem to have been mixed up in the production line! Now Ringo Robot cannot tell one shape from another. Students will help Ringo Robot by identifying and coloring each shape in its corresponding color.
View
2nd grade

Sight Words Can Be “Easy”

Sight Words Can Be “Easy”

Simple tools can help your students to learn sight words! This is an “easy” way to help guide them to reading success. A fun worksheet, it will help your students as they practice the word “easy”. They will identify, read, trace, color, and then write. These reading skills will lead to greater confidence and further…
View 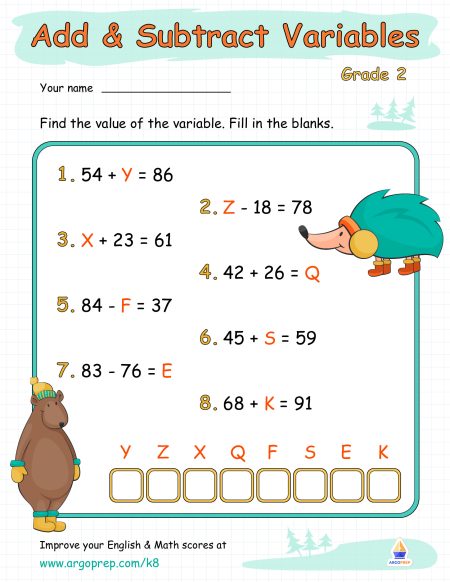 Subtrahends have been scattered far and wide in this mysterious missing numbers worksheet. Students must replace numbers that have been nabbed from every position. There are both addition and subtraction questions. Kids will enjoy sleuthing around to find clues to the missing numbers!
View 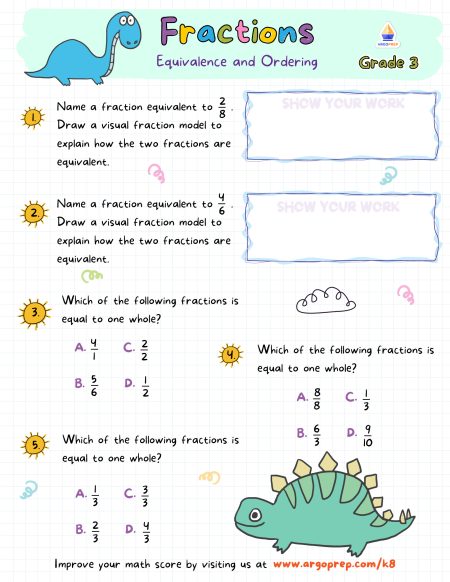 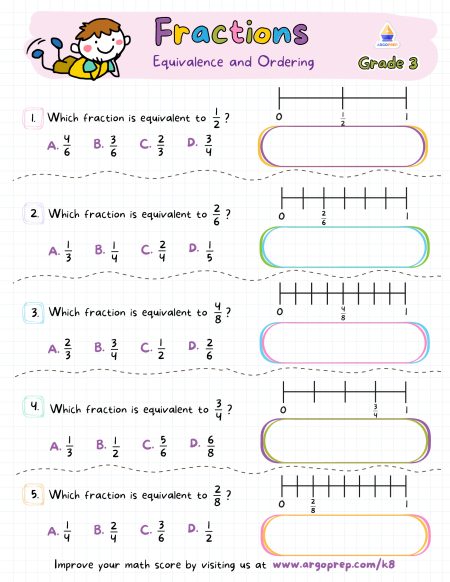 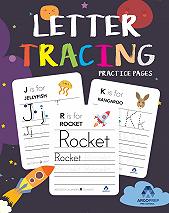 Get ready for Grade 7 with our award-winning summer workbook! This workbook provides twelve weeks of comprehensive review for Math and English Language Arts to help your child get ready for seventh grade. Each week also includes activities for science and social studies that is designed to spark your child’s curiosity. This workbook is designed…
Shop Now
SAVE $8

ArgoPrep’s Kindergarten Math workbook prepares your child to learn basic foundational mathematical skills! Our workbook offers your child dedicated practice for number recognition from 0 to 20, number tracing, word tracing, counting, addition and subtraction skills, and much more. Your child will have a very fun time completing our award-winning workbook! This workbook was organized as…
Shop Now
SALE
6th grade

Sharpen your skills for Grade 6 over the winter break with our award-winning Winter Series workbook! This beautifully designed workbook (printed in full color) provides your child two weeks of practice activities for math, reading, science and social studies to work on during the winter break. We understand how coronavirus has impacted your child’s education…
Shop Now
SAVE $13 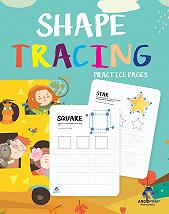 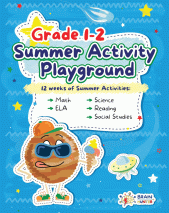 Get ready for Grade 2 with our award-winning summer workbook! This workbook provides twelve weeks of comprehensive review for Math and English Language Arts to help your child get ready for second grade. Each week also includes activities for science and social studies that is designed to spark your child’s curiosity. This workbook is designed…
Shop Now
SALE
6th grade 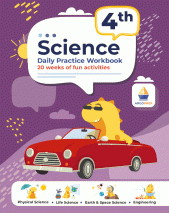 Our science workbooks offer students with 20 weeks of practice of various science skills required for first grade including Physical Science, Life Science, Earth & Space Science, and Engineering. Engaging with the topic: Read a short text on the topic and answer multiple choice questions. Exploring the topic: Interact with the topic on a deeper level by…
Shop Now
New
Kindergarten

9 min read
75 Fun Questions to Ask Your Child
K8
Fun Questions to Ask: Introduction Is your child an eager beaver? Is he asking relentless questions about almost anything that captures his imagination? Kids ask a lot of questions every day. Sometimes these inquiries become repetitive, but most of the time they are thoughtful and innovative. Either way, the barrage can sometimes overwhelm us, whether […]

10 min read
SBAC Practice Test
K8
Introduction Over 6,000,000 students took the SBAC test in 2017. Over 200 institutions around the country recognize the SBAC results for students entering into college-level courses. Additionally, the SBAC is credited for providing real-world applications for students preparing to enter the workforce. In short, the SBAC test is quickly becoming a cornerstone in the United […]