What Does IKR Mean? Let’s Find Out

Do you often wonder what IKR means? If this abbreviation puzzles you too then welcome to the club. It’s not your fault if you don’t understand it because it wasn’t really an authentic phrase of the English dictionary since the start.

However, often people tend to make the language even trickier with self-made contractions and slang. Since the age of the internet especially, a long list of slangs came into existence for chats and one-to-one texts.

The entire purpose of slang and abbreviations like IKR is to incorporate upbeat, lighthearted, and fun elements into conversations. Many adopt these in their speech and text just to sound chic and hip while others simply don’t like staying out of trends.

Whatever your reason for wanting to learn about IKR, we have tons of information on it for you here. Keep reading!

IKR – What it means

The full form of the abbreviation IKR is ‘I know, right?’

It is basically rhetoric that indicates your agreement with what another person is saying, their observation, or opinion. Since the use of the internet spread and social media platforms became the norm, several abbreviations have come into existence. For example, we still use PS, or Post Scriptum, meaning to emphasize a point, add a bit of a charm, etc.

They have now become a concrete part of our spoken and written language. Moreover, they’re now so popular that even professional people use these slang and abbreviations as an alternative to the authentic ones.

For instance, we see more people using IKR instead of responding with ‘yes’ or ‘I know’ these days.

Moreover, it’s not only the agreement with another’s opinion that IKR conveys but also depicts a sense of relief.

For example, feeling reassured that the other also share the same opinions and thoughts as yours.

There is no tricky rule to use IKR and you can insert it in your speech when you feel it sounds appropriate.

For instance, if someone says, “I hate how people disrespect others”, you can respond by saying, “IKR? I would never tolerate disrespectful behavior in my presence, whatsoever!”

The advantage of social media or internet slang and abbreviations is that no tricky grammar rules apply to them. You can use them as you please, but only make sure the sentence as a whole sounds correct.

It’s important to remember that despite being an informal abbreviation, IKR is a loaded phrase. What we’re trying to imply here is that the abbreviation not only conveys your wholehearted agreement but also your relief at the same beliefs.

Hence, when using it, be very sure of what you want to convey to the other and how much you want to commit to a cause. If you don’t really agree or share the same thought as the other, you shouldn’t use this abbreviation at all in response.

There’s another flexibility people enjoy with initialism like these, and that is not having to worry about punctuation or capitalization. Therefore, you will also see many people writing ‘ikr’ instead of ‘IKR’ and that would still mean the same.

IKR – How it became a part of the English Language

Here is a surprising fact for you: IKR has been in existence since the 1990s. Was that before you were born? For many, this abbreviation may be relatively new but in truth, IKR has been around for more than thirty years now. Whew!

If you talk to the 90s generation, they’ll tell you that they associate IKR with the stereotypical ‘Valley Girl’.

However, it wasn’t until the ‘Mean Girls’ movie in 2004 that this abbreviation truly became popular far and wide.

2004 was also the time when internet and social media use was gaining momentum across the world. Hence, abbreviations for almost everything was coming into existence.

Finally, in 2005 the urban dictionary accepted IKR and even its definition was similar to a quote from Mean Girls.

Google was not too quick to hop on to the bandwagon just yet though. It took its time and finally gave the abbreviation IKR the spotlight in 2009. Since then, this abbreviation has become a mainstay in our vocabulary.

IKR is no longer a movie quote or a slang of the stereotypical Valley Girl. Today, IKR is a part of the urban dictionary and Google accepts it too.

Moreover, IKR is a useful initialism that people commonly use whenever they wish to express strong agreement with others.

We know the abbreviation does not stem from a noble origin but like most others that have surfaced since the internet, it helps with quick communication. 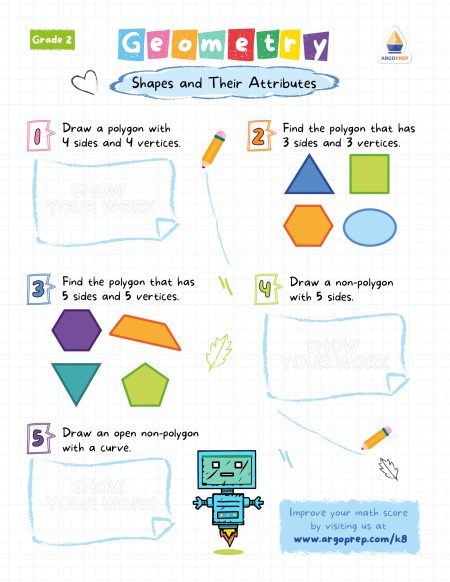 Polygons or non-polygons? Help the robots decide the differences between the two. Students will soar as they identify various shapes on this worksheet. Thinking carefully about various attributes, learners will find and draw correctly as they shape up and sharpen their geometry skills.
View 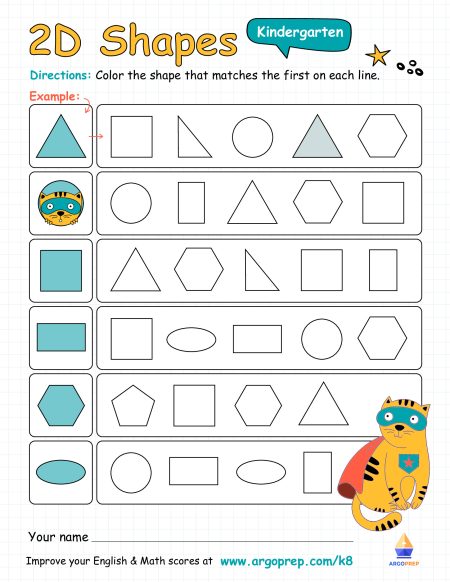 Shapes are super! Use your math superpowers for good and help Super Cat color the matching shapes. Students will identify and color triangles, circles, squares, rectangles, trapezoids, and ovals. An example is provided as a model for students.
View 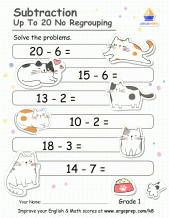 Did you know practice is the best way of making children mathematical geniuses for life? Imagine how they’ll always praise you when they can relate big numbers without needing a calculator through their lifetime. Use our printable worksheet to accomplish this great mathematical milestone with your kids!
View Crawling Up the Doubles Tree

Crawling Up the Doubles Tree

These creepy-crawlies love doubles plus two addition problems! Students will get some great practice matching the initial problems on the left with the rest of the equations on the right. There are six problems on this worksheet.
View
2nd grade

“How” Many Words Can You Learn?

“How” Many Words Can You Learn?

“How” many words can you learn? This worksheet will help students to learn another new sight word as they identify, read, and trace. They will also have the opportunity to color and write. Let them show you their reading skills as they soar with confidence!
View 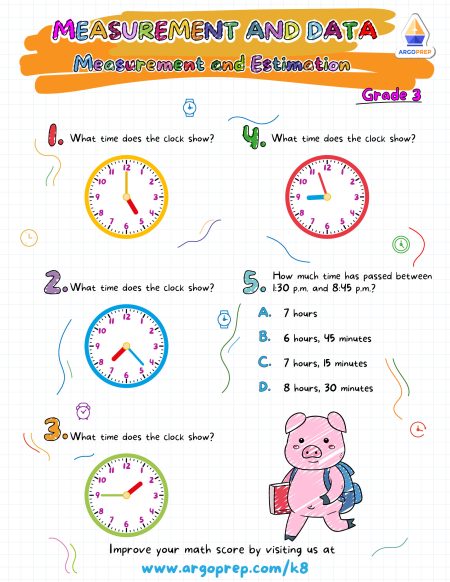 Check the clock to tell the time! Determine the elapsed time and show off your math skills. Students will gain confidence as they practice their clock and telling time skills. Hours, minutes, and elapsed time are the focus of this math resource.
View
3rd grade

Your learners have “questions” about unknown words, and this is a great way to help them learn something new! They will build on their previous reading knowledge by focusing on a new sight word! This worksheet will bring confidence to your students as they identify, read, trace, color, and then write a sentence with the…
View 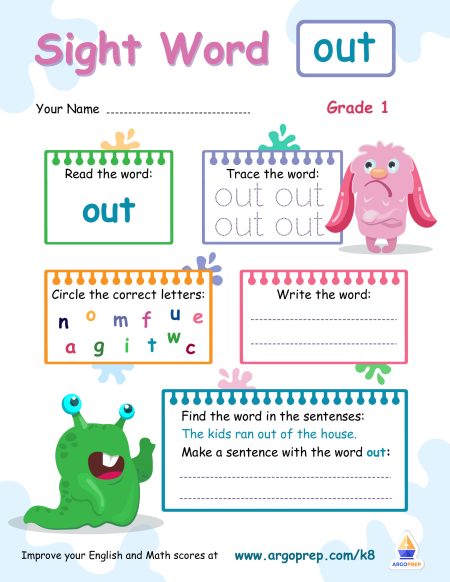 “Out” and About with Sight Words

“Out” and About with Sight Words

Your students will love learning about sight words with this worksheet! Let them gain new knowledge as they focus on the sight word “out.” They will identify, read, trace, color, and write. With a multitude of ways to gain confidence, this is one you’re sure to want to share with them!
View 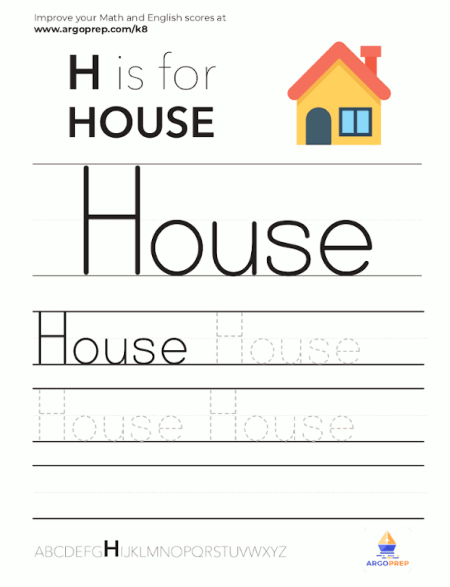 Tracing will now become a lot more fun with our worksheets in your classroom. Our House worksheet is sure to enthrall your young learners and eagerly learn, write and memorize the word ‘House’.
View 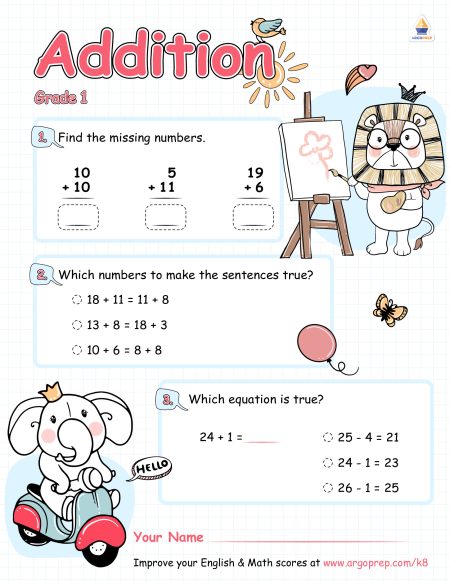 Lion is finishing a birthday painting for his friend Elephant’s birthday lunch at his house, but Elephant’s scooter can’t go! Students will “fuel” Elephant’s trip with each correct sum they find. They will add one and two-digit numbers, and find the correct equations in this adorable five-question worksheet. Go, Kids, Go!
View 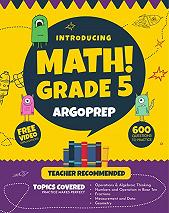 Our science workbooks offer students with 20 weeks of practice of various science skills required for first grade including Physical Science, Life Science, Earth & Space Science, and Engineering. Engaging with the topic: Read a short text on the topic and answer multiple choice questions. Exploring the topic: Interact with the topic on a deeper level by…
Shop Now
SALE
5th grade

Introducing Math! by ArgoPrep is an award-winning series created by certified teachers to provide students with high-quality practice problems. This workbook is designed to provide you with a comprehensive overview of Grade 6 mathematics. Our workbooks include topic overviews with instruction, practice questions, answer explanations along with free digital access to video explanations. Practice in confidence – with ArgoPrep! Chapter 1: Ratios…
Shop Now
SALE
8th grade

Get ready for Grade 9 with our award-winning summer workbook! Summer Activity Playground series offers your child the perfect summer workbook to prevent learning loss and help prepare them for September. This workbook provides twelve weeks of comprehensive review for Math and English Language Arts to help your child get ready for 9th grade. Each…
Shop Now
SALE
8th grade

13 min read
Why Do You Need Hexagonal Thinking in the Classrooms?
Blog Educators
Back to school? Don’t be afraid if your students are not participating actively in the classroom. Returning to school during the COVID-19 pandemic is tough. Children are overwhelmed by the sudden flow of academic pressure, trauma, and change of routine. We have no idea what they have been going through during this time. But there […]