Most people are afraid of the number 13 because it means bad luck, especially on
Friday the 13th. The fear of people in this number can be traced back to religious
believes – particularly Christianity.

This can actually be seen in the illustration of the “Last Supper” during Jesus’ last meal with his 12 disciples, and Judas being the 13th apostle that will betray Jesus. The number 13 was then associated with the agony of Jesus, who was crucified the following day.

More so, some condominiums and hotels skip putting 13th floor. For them, the 13th floor doesn’t exist as it will not be sold to some potential buyers. On the other hand, Taylor Swift considered 13 as her lucky number.

Swifties probably know the reason why – aside from the fact that she was born on December 13, 1989, her first debut album was on top for 13 weeks.

Furthermore, every time she is seated in row M (13th letter) or row 13 during an awards night, she’s certain that she will get that trophy!

Some numbers may be unlucky for some, but luck really depends on how we see it.
And we are certainly lucky to learn more things about 13, aren’t we? Now, let’s ride this getaway car and remember how gorgeous this 13 and it’s multiple are!

Multiples of 13 are numbers that when divided by 13, will get an exact number or a number with zero remainders. Simply, it is the product of 13 and any integer. Thus, we can say that when a random number is expressed as 13n, we already know that it is a multiple of 13.

We can also say that if a sequence where the difference between consecutive numbers is 13, it is a multiple of 13.

How to find the multiples of 13?

One method for determining multiples of 13 is to skip count by 13. This is accomplished by simply adding 13 as many times as you desire. For example, to find the first five multiples of 13, we begin with the number itself – 13.

This method is excellent if we are to find a small nth multiple of a number such as finding the first 5 or 10 multiples of 13… but it is not the most convenient way to find the 15678th or 99999th multiple of 13.

See how convenient multiplication is in determining multiples of 13? Now let’s take a look at the table. The table below shows the result of skip counting and multiplying 1 to 5 and 13.

The word triskaidekaphobia is for people who suffer from the fear of the number 13? Stephen King, a famous writer, has this phobia wherein he skips the 13th step of a staircase, becomes uneasy watching shows on Channel 13 – or even skipping pages 13 and pages when added up to 13, such as pages 94 and 193.

Are you also scared of the number 13?

It is not wise to list all multiples of 13, because this will probably contain an infinite number of thirteen multiples. This is why the multiplication table is limited to the first 30 multiples of 13.

Now that we’ve discussed the definition and process of finding multiples of 13, it is now time to apply it in solving real-life problems!

Zack has been preparing his Christmas presents for the street children since the start of December. For the past nine days, he has been buying random toys that is in the sequence 13, 26, 39… and so on. How many gifts does Zack plan to give to the homeless kids?

To solve the total number of gifts Zack plans to give, observe that as the day goes by, the number of toys he buys has a constant increase of 13. Hence, we can say that it is a sequence of multiples of 13.

Now, we are asked to get the total number of presents he prepared for the kids. So, we are going to add these numbers. Thus,

Therefore, Zack plans to give away 585 Christmas presents for the homeless kids.
What a lovely heart Zack has!

Now, let’s try if we can solve the next problem.

Suppose Taylor released 13 albums already – and within each album contains 13 songs that can be played for exactly 13 minutes. What is the total number of minutes you can listen to all her albums?

We are asked to find the total number of minutes it will take us to finish all the 13 albums Taylor has released. It was stated that every album contains 13 songs, and each of those songs will take 13 minutes to complete. Hence, we just need to get the
product 13 albums, 13 songs, and 13 minutes.

Therefore, we can finish all 13 albums in 2,197 minutes. That’s a lot of minutes, but we’re pretty sure we can remember all her songs all too well!

Finding the multiples of 13 is fun, huh? Now, let’s answer the three practice problems in style!

What is not a possible multiple of 13?

Lena tends to impulse buy everything she finds beautiful. Last week, she bought 13 pairs of shoes and 13 bags. And just recently, she checkout 13 dresses and 13 pairs of jeans. How many items did she pay for in the last two months?

No. 13 may be an odd number, but every time we multiply it to a positive even integer – the result becomes an even number.

Multiples of 13 can be determined by multiplying a random positive or negative number to 13. 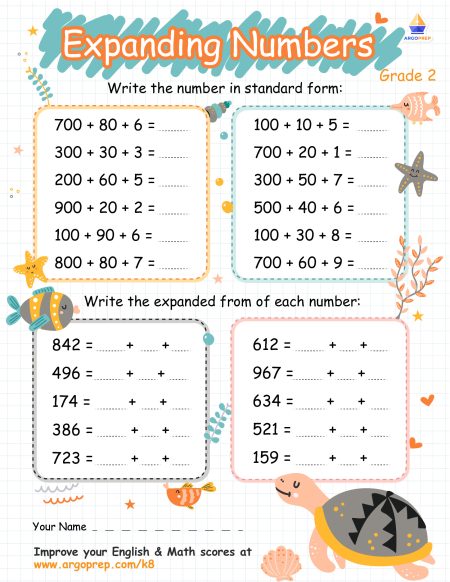 Number concepts are greatly improved with transferring numbers from standard to expanded form and back again! Students will get some calm practice with just that on this worksheet. There are twenty problems, so it makes a great worksheet for either practice or assessment.
View 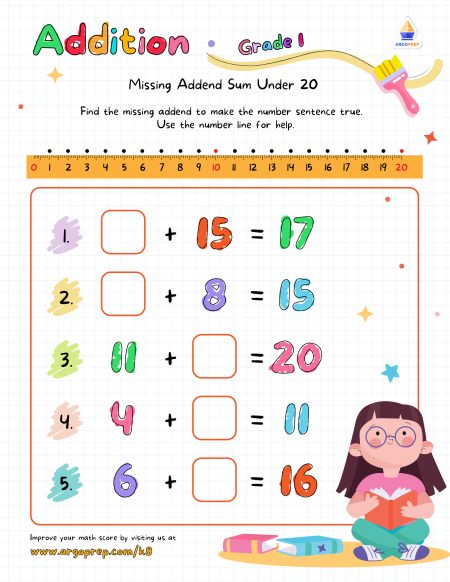 Reach for the Skies

Reach for the Skies

What’s missing? Each of these two-addend number sentences is missing one very important piece! Once students fill in the blank, they’ll be ready to take off into bigger and better addition adventures. This is a two-page set. Each page has five problems, and all sums are between 11 and 20.
View 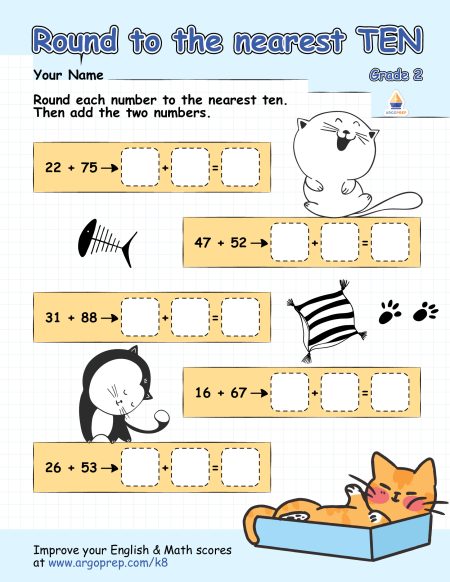 Cathy Cat and her friends love rounding so much they are singing! Join the fun by helping them round numbers in this combined rounding and addition activity. Students will first round each two-digit number to its nearest ten. Then, they will add the numbers together.
View Students will draw examples of each of the vocabulary words they know related to lines, rays, points, and angles in this worksheet. Vocabulary used for this worksheet include: point, line, line segment, ray, right angle, acute angle, obtuse angle, perpendicular lines, and parallel lines.
View 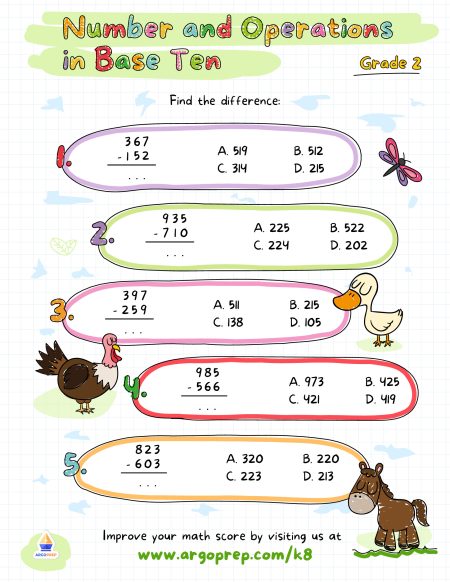 These animals are looking for some subtraction help! Note the differences as you subtract to solve. Focusing on three-digit numbers, learners will have ample opportunities to show what they know as the solve to find the difference in each subtraction problem.
View 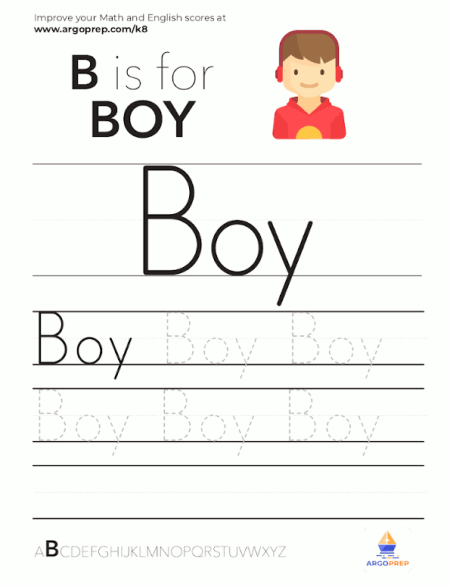 Develop interest and eagerness for vocabulary building and handwriting practice in your little learners with our engaging worksheet. Tracing the word boy will show them just how much fun learning can be!
View 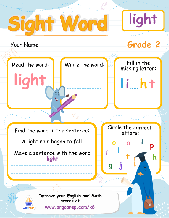 This worksheet will be a bright “light” in you students’ day as they build confidence with reading! Students will be thrilled to partake in this worksheet! This sight word tool will allow your learners to identify, read, trace, color, and then write a sentence with the word “light.” Let them show you what they know…
View 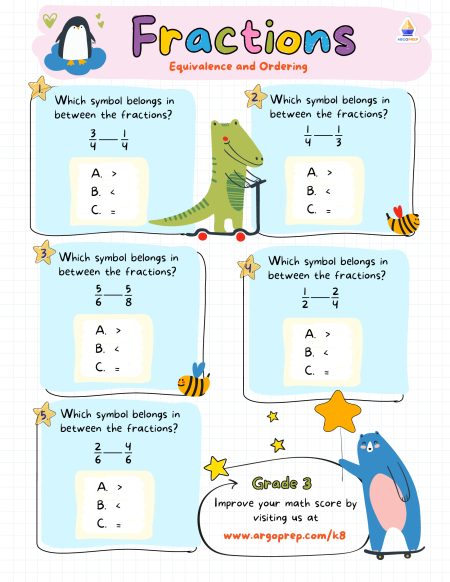 Great than, equal to, or less than? Learners will decide as they focus on the fractions on these two brightly-colored worksheets. Students will have the opportunity to engage their higher-order thinking skills through the use of words and visual models. A perfect introduction, practice, review, or assessment, this is a fraction resource you won’t want…
View Students will add ’em up with this friendly robot worksheet! Each of the six problems is missing its middle number. Kid will complete the equation, which will equal twenty or fewer. Instruction for celebratory robot dance not included.
View This studious mouse is learning all about area! Help him to find each correct answer. Using given pictures, answer choices, and space to draw, you will be able to show off your math skills as you solve!
View

Get ready for Grade 5 with our award-winning summer workbook! This workbook provides twelve weeks of comprehensive review for Math and English Language Arts to help your child get ready for fifth grade. Each week also includes activities for science and social studies that is designed to spark your child’s curiosity. This workbook is designed…
Shop Now
SAVE $8

ArgoPrep’s Kindergarten Math workbook prepares your child to learn basic foundational mathematical skills! Our workbook offers your child dedicated practice for number recognition from 0 to 20, number tracing, word tracing, counting, addition and subtraction skills, and much more. Your child will have a very fun time completing our award-winning workbook! This workbook was organized as…
Shop Now
SAVE $30
6th grade

Sharpen your skills for Kindergarten over the winter break with our award-winning Winter Series workbook! This beautifully designed workbook (printed in full color) provides your child two weeks of practice activities for math, reading, science and social studies to work on during the winter break. We understand how coronavirus has impacted your child’s education for…
Shop Now
SALE
3rd grade

6 min read
Math Games for Kids
K8
Beginning math isn’t as simple as it seems. There’s much more to learn than 123. That said, with a little guidance, there is a LOT you can teach the little mathematicians at your house. Read on to get an idea of the basics you’ll want to lay in the early years. We’ll even share some […]