Ten is the first two-digit even number that comes after 9 and before 11. Having ten
fingers and ten toes may have probably led our early mathematicians to consider ten as the base value in our decimal number system.

For some, 10 is considered as the end of a cycle and perfection. Pythagoras and his
followers considered 10 to be the most sacred number of all.

This is because adding numbers from 1 to 4 will be equivalent to 10 – which for them signifies existence (1), creation (2), life (3), and the elements of earth, air, fire, and water.

10 is indeed an important number in our number system – and knowing more numbers that are connected to this number can also be of great help to our lives.

Are you ready to board another journey of finding multiples of 10? Say no more as we start our flight towards this exciting expedition!

When an integer is multiplied by ten, the products are multiples of ten. A multiple of 10 is a sequence in which the difference between its consecutive numbers is 10.

Multiples of 10 can also mean that every time a number is divided by 10, it will always result to a zero remainder. We can acquire a positive multiple of 10 by simply multiplying 10 to any positive number.

Similarly, multiplying 10 to any negative integer yields a negative multiple of 10. Remember that fractions cannot be utilized to generate a multiple of 10 because a whole number is required.

10 as a factor and multiple

Now, let’s journey further in determining the multiples of 10.

How to find the multiples of 10?

Multiples of 10 are as easy as counting 123s – and so as finding its nth multiple. We can do this by using the two previously learned methods – skip counting and multiplication!

To find the consecutive multiples of 10 through skip counting, we will start with 10. Then, to find the next multiple, we will simply add 10.

Skip counting is also referred to
as repeated addition – which means, to get any multiple of 10, we will repeat adding 10 until we get to the nth we want to get.

Now, since we now know that adding two 10s will result to 20, adding another 10 will give us the result of 30.

Now, let’s look try another method in finding multiples of 10.

Multiplication is the faster way we can solve to get any multiples of a number. When we say that a number can be expressed as 10n, we are certain that it is a multiple of 10.

Notice how the outcome of skip-counting and multiplication will always give the same result? This is due to the fact that both are methods in finding any multiples of 10.
However, for some, they see multiplication as a quicker method.

Multiplying any number by multiples of ten is much easier than conventional
multiplication? This can be done by simply copying the nth multiple we are looking for and adding the trailing 0 at the end of the number!

It is very simple and remarkable, isn’t it?

The table displays the first 30 positive multiples of 10 as well as how it is formed. We can readily see that multiplying any number by 10 produces various multiples of 10.

Did you notice something?

If we get any multiples of 10, we will always have a result that ends with 0! This observation will help us easily determine that a number is a multiple of 10.

To solve this problem, we need to find the total number of ten-dollar bills Sandara has. We can do this by adding all the ten-dollar bills she found in her wallet, pocket, and room. Thus, 20 + 2 + 5 = 27.

Then, to find the total money Sandara has, we are simply going to multiply 27 by ten dollars.

Now, let’s try to work on another problem.

Rexford joined a team building in their school fair. On one of the tasks, they were given a clue that they needed to answer to proceed to the next station. The clue says:

Determine the number that is being described.

What is my number?

Can you help Rexford solve their task?

The next condition says that the number should be between 100 and 200. Thus, from the list, the only number that satisfies the given condition is 140.

Therefore, the number Rexford’s team is looking for is 140.

See… finding any multiples of ten is not as complicated as you think it was – and so is solving problems involving multiples of 10.

Are you now ready to challenge yourself more?

Which of the following is a multiple of 10?

Jeremiah is working as a freelance artist. He targets to work 10 hours a day. On his first week, Jeremiah worked for five days. The following week, he worked for six days straight. How many hours did Jeremiah work for two consecutive weeks?

Yes, all multiples of 10 will always have a units digit of 0. 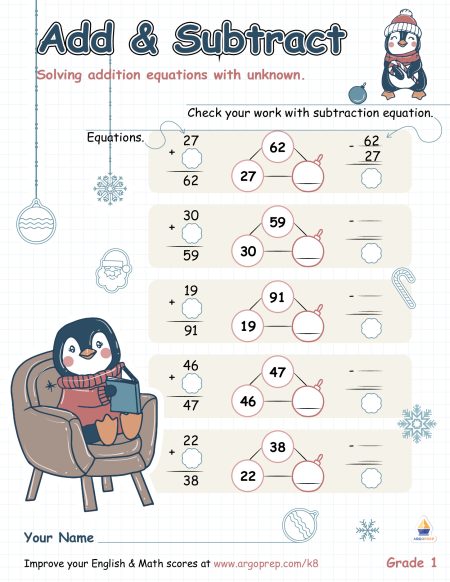 Pedro Penguin has snuggled in to enjoy his holiday book about number bonds, but his little brother erased a bunch of really important numbers! Students can help Pedro fill in the missing number on the number bonds, write a matching vertical addition fact, and create the subtraction equation that helps them “check” to be sure…
View 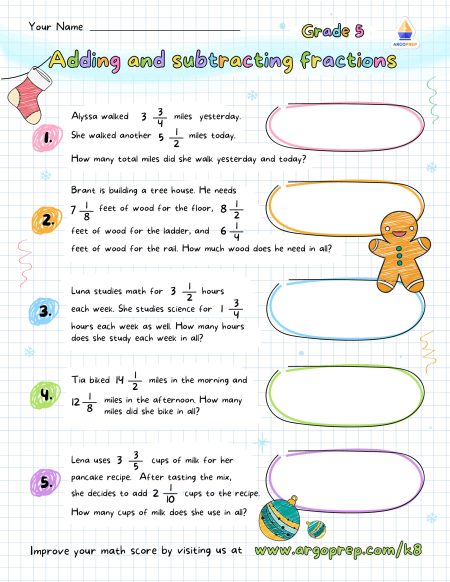 The stockings were hung by the chimney with care, the gingerbread men have been baked, and all that is left to do is solve these fraction problems! Your fifth grade students will be feeling festive as they work to carefully solve each story problem, focusing on fractions. An independent, small group, or whole class activity,…
View 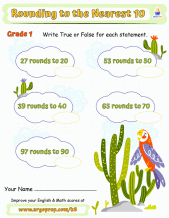 Students will test their prowess in rounding to ten with these true or false statements. They’ll read the rounding sentence, and decide whether the answer is true or not. Then all that’s left is to write in the correct answer. Don’t worry, the words required (true and false) are in the instructions.
View 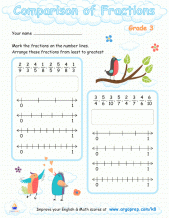 All the Little Birdies on Jaybird Street

All the Little Birdies on Jaybird Street

A little birdie told us your kids will love this worksheet! The comparison and ordering of fractions can be difficult and a bit vague. We’ve put together this worksheet with two sets of eight fractions, and highlighted them with number lines to make the concepts more concrete. Your third-graders will be singing your praises in…
View
2nd grade

Your students will make the “grade” with this learning resource! Sight words will come naturally to them as they practice by identifying, reading, tracing, coloring, and writing the word “grade.” A great way for them to show off their skills and become confident readers and writers, this is a resource you won’t want to skip!
View 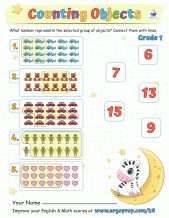 There are lines on the zebra, lines around the object – lines everywhere! Students will draw a line from the objects circled in the groups on the left side of the page and match them with numbers on the left.
View 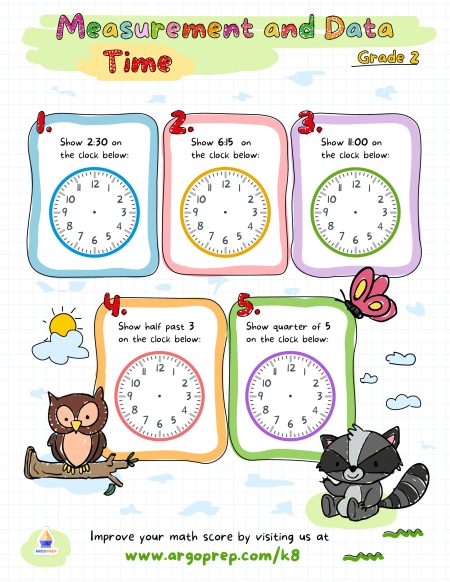 Is It Bedtime Yet?

Is It Bedtime Yet?

Owl and Raccoon, who both sleep during the day and are awake all night, lost the hands from all their clocks! Students will help them by reading the times and drawing the matching hands on each clock. This worksheet includes telling time to the hour, half-hour, and quarter-hour.
View 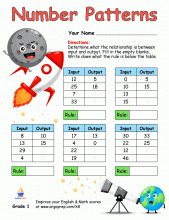 Kids will love being the brains of the operation with these computation problems. They’ll determine whether each input/output table is being affected by addition or subtraction. Then they’ll determine the exact difference between the input and output numbers. They’ll record the discovered rule, and complete the chart. Rocket not included!
View 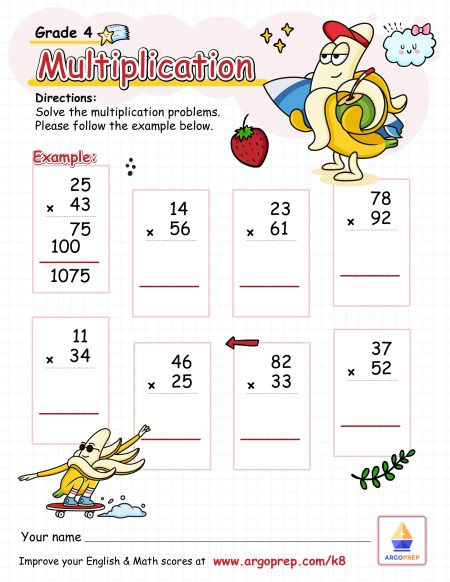 “Introducing Math and Science” by ArgoPrep is an award-winning series created by certified teachers to provide students with high-quality practice problems. The 1st Grade Math and Science workbook is designed to provide you with a comprehensive overview of 1st mathematics and science. Our workbooks include topic overviews with instruction, practice questions, answer explanations along with…
Shop Now
SALE
8th grade

Get ready for Grade 9 with our award-winning summer workbook! Summer Activity Playground series offers your child the perfect summer workbook to prevent learning loss and help prepare them for September. This workbook provides twelve weeks of comprehensive review for Math and English Language Arts to help your child get ready for 9th grade. Each…
Shop Now
SALE
8th grade, 7th grade

Get ready for Grade 8 with our award-winning summer workbook! This workbook provides twelve weeks of comprehensive review for Math and English Language Arts to help your child get ready for eighth grade. Each week also includes activities for science and social studies that is designed to spark your child’s curiosity. This workbook is designed…
Shop Now
SAVE $10

Yoga and Mindfulness for Kids is the perfect resource to transform your kids into little yogis while creating a structured, positive activity that you and your young ones can enjoy together. Introducing your children to yoga at an early age encourages healthy lifestyle habits and sets a foundation for a fit future. Here is what…
Shop Now
SAVE $30
6th grade 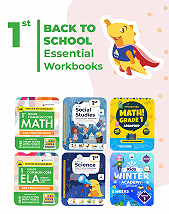 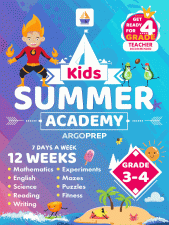 12 Weeks of Math, Reading, Science, Logic, and Fitness Updated for Summer 2022, prepare your child for Grade 4 with our award-winning Kids Summer Academy workbook by ArgoPrep. ArgoPrep’s 2022 Kids Summer Academy Series is designed to keep students engaged and prevent summer learning loss. More importantly, students will be introduced to Grade 4 concepts so they can be one step…
Shop Now

6 min read
Pre-K Education: What Will My Child Learn?
K8
Whether to send a child to pre-k is a decision every parent has to make. Different variables such as resources, location, and quality of education make this choice harder for some parents than others. It is certainly not cheap, and while daycare centers are almost ubiquitous, preschools are hardly as numerous. Considering these potential restraints, […]

9 min read
Go Math Grade 6 vs. ArgoPrep Grade 6
K8
Introduction Go Math Grade 6 and ArgoPrep Grade 6 both set the industry standard for exceptional supplemental instruction. Because of the diminishing time available for instruction, paired with the growing list of standards and expectations for teachers to cover during a traditional school year, teachers are struggling to fit it all in and maximize retention! […]